World in solidarity with Turkey after ‘heinous attack' 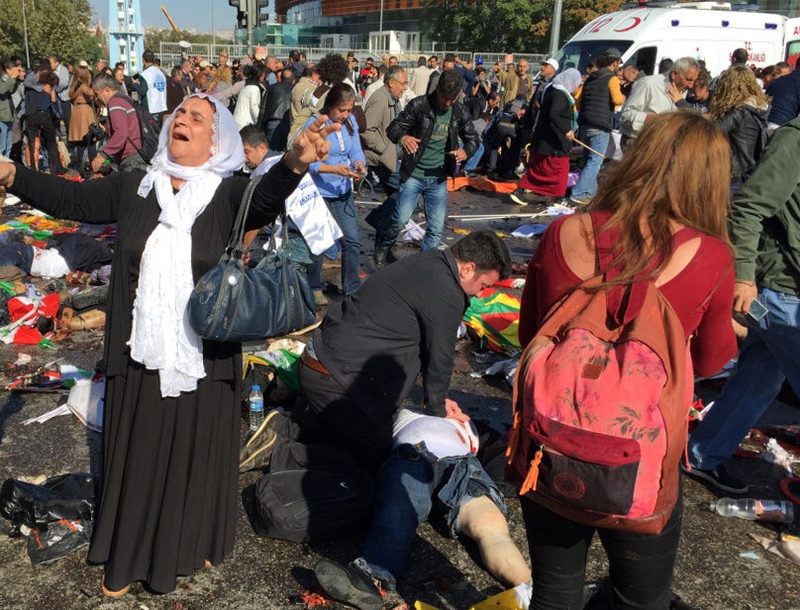 by daily sabah
Oct 12, 2015 12:00 am
Following twin bomb attacks in the capital Ankara Saturday morning that went down in history as the deadliest terrorist attack in Turkey, world leaders offered their condolences to President Recep Tayyip Erdoğan and Prime Minister Ahmet Davutoğlu, condemning the attack and indicating solidarity with Ankara.

U.S. President Barack Obama held a phone conversation with President Erdoğan and conveyed his condolences. The White House released a statement regarding the phone conversation between two leaders. "The president conveyed his deepest personal sympathies for those killed and injured in these heinous attacks, and affirmed that the American people stand in solidarity with the people of Turkey in the fight against terrorism and shared security challenges in the region," the statement read.

NATO Secretary General Jens Stoltenberg called the terrorist attack horrendous and stated that there can be no justification for such an attack. Stoltenberg added that all NATO allies are in solidarity with Turkey against terrorism.

The Russian President Vladimir Putin also offered his condolences to President Erdoğan in the wake of the attack. According to a statement from the Kremlin, President Putin sent a telegraph to President Erdoğan and underscored that Russia stands ready to collaborate with Ankara in the fight against terrorism. In a televised interview, Putin further commented on the incident calling it a clear provocation in the period of election campaigns.

German chancellor Angela Merkel conveyed her condolences to Prime Minister Davutoğlu saying the attack directly targets the social solidarity of the Turkish people and is an effort to dismay and spread terror.

French president François Hollande also condemned the attack and offered his condolences to President Erdoğan, a statement from the Elysee Palace said. The French Foreign Ministry released a statement from its website and expressed that France is in solidarity with the Turkish government and the Turkish people.

The president of the Kurdistan Regional Government (KRG) Masoud Barzani strongly condemned the attack and said that the objective of the terrorists in this attack is to create a chaos environment in Turkey. Barzani also underscored that the attack aims to turn the Turkish people against each other.

Pope Francis, the head of the Catholic Church, touched on the deadly attack that took place in Ankara during his speech where he addressed thousands gathered at St. Peter's square. Sharing his pain for the lives lost in Ankara, the pope prayed for Turkey.