Ankara says EU beginning to realize its role on migrants, no aid deal yet 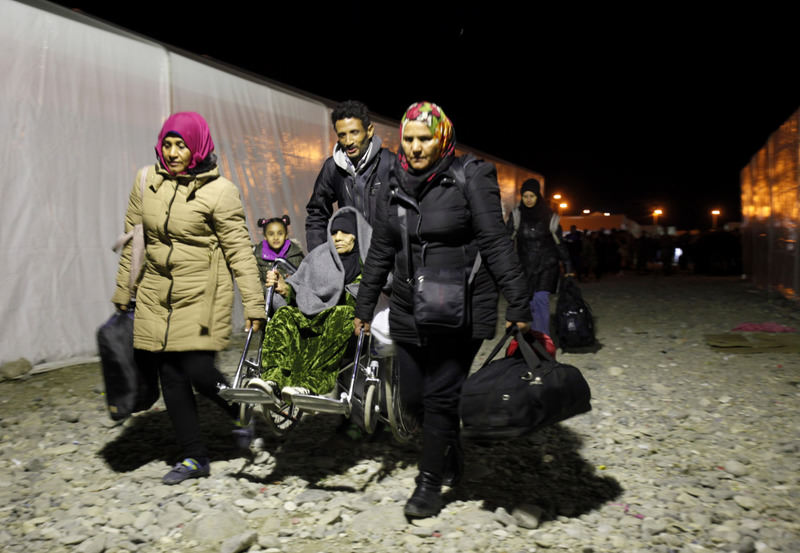 Syrian migrants help an elderly woman in a wheelchair at the transit camp for refugees near the southern Macedonian town of Gevgelija.
by Mehmet Solmaz
Oct 17, 2015 12:00 am

During her visit to Ankara over the weekend German Chancellor Merkel will reportedly try to convince Turkey about the action plan that the EU drafted to solve its migrant crisis. However, Ankara criticized the idea of the EU offering financial help, saying there needs to be a comprehensive solution to the problem

German Chancellor Angela Merkel, who was scheduled to pay an official visit to Turkey on Saturday to discuss Europe's problematic migrant burden, will reportedly try convincing Turkey on the action plan that the EU drafted. However, Ankara criticized the idea of the EU offering financial help to Turkey to ease the migrant crisis and that the 28-bloc union had woken up too late to Turkey's importance in stemming the flow of refugees from Syria and accused it of insincerity in talks on Turkish membership despite recent overtures.

President Recep Tayyip Erdoğan said his NATO nation's proximity to Syria and its key role in handling the refugee crisis had strengthened its case for EU membership."The West and Europe's security and stability is contingent on our security and stability. They have accepted this now. In the talks I held in Brussels last week they accepted all this. It can't happen without Turkey," Erdoğan told a conference in Istanbul. "So if it can't happen without Turkey, why don't you take Turkey into the EU? The problem is clear but they are not open. They are not clear. They say 'We made a mistake on NATO, let's not make the same mistake on the EU.' That is the problem," he said.

Foreign Minister Feridun Sinirlioğlu on Friday slammed the EU offer. "There is a financial package proposed by the EU and we told them it is unacceptable," Sinirlioğlu told reporters, saying Turkey needed at least 3 billion euros in the first year of the deal. He said the action plan agreed late Thursday is "not final" and merely "a draft on which we are working."

EU leaders said Thursday that they had agreed with Erdoğan on a migration "action plan," offering a possible 3 billion euros in aid to Turkey to help halt the migrant flow to Europe. But sources in Ankara denied the claim and said there was no final agreement yet. Sinirlioğlu said the plan had not taken its final shape and it was wrong to give the impression that Turkey wanted a certain amount of funds to keep refugees in Turkey. The action plan aims for greater cooperation with Turkey, which has a 900-kilometer border with Syria, on improving the lives of the more than 2.2 million Syrian refugees in Turkey and on encouraging them to stay put.

Though the plan put no figure on "substantial and concrete new funds" the EU would offer, Chancellor Merkel, who will meet Erdoğan in Istanbul on Sunday, said the figure of 3 billion euros, which EU officials said Ankara had requested, had been discussed and seemed reasonable.

"We have spent $8 billion until now. How much support did the world give us? $417 million," said Erdoğan.

Erdoğan said Europe only woke up to the scale of Syria's refugee crisis when pictures of the tiny body of three-year-old Aylan Kurdi, whose family was trying to reach Europe, washed up on a beach near the Turkish resort of Bodrum last month. "When that toddler Aylan washed up on Bodrum's shores, they started using that photo on the front of their magazines and started questioning themselves," Erdoğan said.

"Ok, but how long have we been shouting and calling? In Turkey now there are 2.2 million Syrians alone. There are 300,000 Iraqis," he said. Justice and Development Party (AK Party) spokesman Ömer Çelik said the migration crisis and Turkish accession negotiations were two separate issues and that membership talks should not be "a matter of political bribery."

Foreign Minister Sinirlioğlu later told reporters in Ankara that Turkey had told its EU partners the focus on security measures was wrong and that Ankara had pushed the idea of a safe zone to keep refugees in their own countries.

In formal conclusions agreed by the 28 national leaders at a late-night meeting, Turkey was offered an accelerated path to giving its citizens visa-free travel to the EU, provided it met previously agreed conditions.