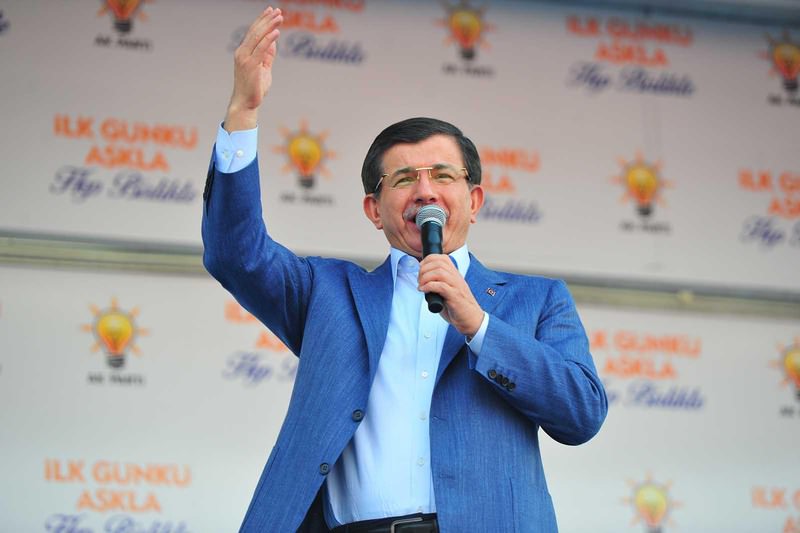 by daily sabah
Oct 17, 2015 12:00 am
During the Justice and Development Party (AK Party) meeting in Bursa on Friday, Prime Minister Ahmet Davutoğlu said that those who criticize the state after the Ankara bombings should instead condemn the terrorists responsible for the violence. He said: "Those who could not condemn terror started to condemn the state. Leaders of political parties even made provocative remarks."

Only a couple hours after the deadliest terrorist attack in modern Turkish history, which claimed the lives of around 100 people and wounded more than 250, pro-Kurdish Peoples' Democratic Party (HDP) Co-Chair Selahattin Demirtaş was at the scene of the incident where he attempted to turn the calamity into a small HDP rally and vowed to take down Erdoğan in the upcoming Nov. 1 elections.

He also said: "I am calling upon those who support the PKK's cooperation with the Democratic Union Party (PYD) in Syria. ISIS is a vile and dishonorable terrorist organization, and so is the PKK." He spoke out against several terrorist organizations, including the PKK, ISIS and the Revolutionary People's Liberation Party-Front (DHKP-C).

"Terrorism took many of our brothers from us. This sorrow belongs to no single party, but rather belongs to our entire nation," he said, adding that opposition parties should take more active roles in this process by signing the joint declaration against terror.

Davutoğlu added that his government will take a firmer stand on terrorism and will not allow terrorists to affect the daily life of Turks.

He also said terrorist organizations should not be treated differently and that all killing is unjustifiable. "Nobody can revive this country through terrorism and betrayal," he said.

The twin bombings in Ankara on Saturday last week targeted a peace rally outside Ankara's main train station and have shaken Turkey.

The country faces a general election re-run on Nov. 1, counterterrorism operations in the southeast and an ongoing civil war on its southern border in Syria.

The government announced Thursday that the beneficiaries of the people who lost their lives in the Ankara bombings will be eligible for a monthly payment of 820 Turkish liras ($283).

According to the Ministry of Labor and Social Security, citizens hurt in the incident will also receive a monthly payment ranging from 497 to 820 Turkish liras ($171 to $283) according to the type and degree of their disabilities.