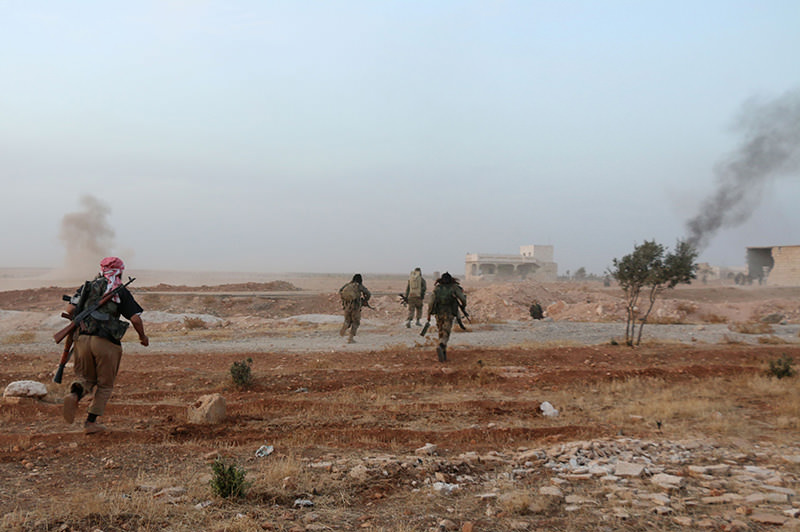 Picture taken on October 17, 2015 shows smoke billowing as Syrian opposition fighters run in the Mount Azzan area, 24 kms from Aleppo (AFP photo)
by daily sabah
Oct 19, 2015 12:00 am
At least 70,000 Syrians have fled a regime offensive backed by Russian fighter jets on opposition-held areas south of the city of Aleppo in the past three days.

The offensive is the latest of at least four launched with Russian air support in the past two weeks. Aside from the Aleppo countryside, people of Aleppo are taking refuge in mostly rural areas north of the cities of Homs and Hama and in the rugged northern parts of Latakia province along the coast.

On Sunday, Prime Minister Ahmet Davutoğlu warned that the offensive south of Aleppo as well as attacks in the area controlled by the Islamic State of Iraq and al-Sham (ISIS) could "cause another wave of refugees."

Many villages were vacated, the BBC reported, citing Dr. Zaidoun al-Zoabi, the head of the Union of Syrian Medical Relief Organizations. Zoabi said he saw thousands of people on the move with no shelter or medical support.

Forces loyal to the Syrian regime and allied Iranian and Hezbollah forces have been preparing a ground offensive against the opposition in the Aleppo area backed by Russian air support. 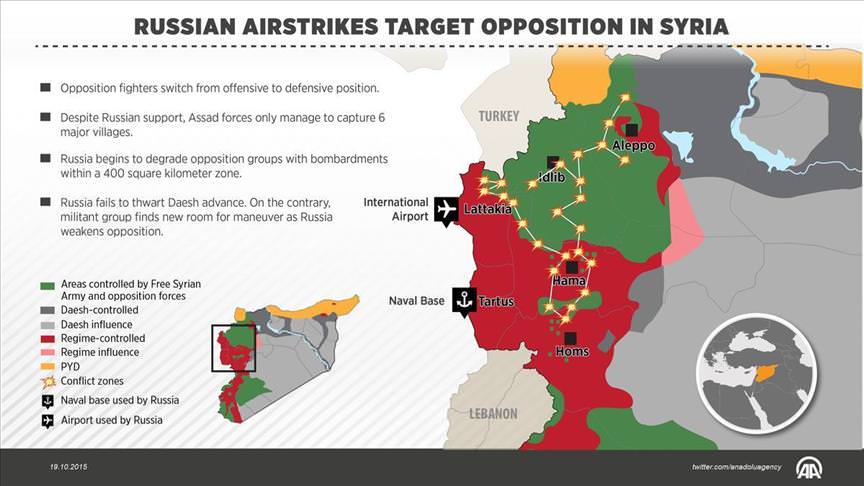 Analysts warn that over 2 million Syrians could flee their homes if Aleppo falls to Syrian President Bashar Assad's regime or ISIS. NATO member Turkey fears that the number of the already 2.2 million refugees in the country could almost double and lead hundreds of thousands to attempt to cross through Turkey to the EU.

Ankara has long argued that establishing safe and no-fly zones would help solve the Syrian crisis and that there would be fewer refugees fleeing the country.

The offensive expands on a ground attack launched by the same alliance last week that is targeting the opposition in the province of Hama further to the west. Thousands of Iranian troops recently arrived to take part in the ground offensives in support of the Syrian regime.

Control of Aleppo and the surrounding province is divided between the Syrian regime, a range of opposition groups fighting Assad and ISIS, which controls some rural areas near the city.

One regime official, speaking to a media outlet, said: "The decision to launch the battle of Aleppo has been taken. ... It is no longer hidden that thousands of Iranians are now in Syria and their role is fundamental." A general in the Iranian Revolutionary Guard, Hossein Hamedani, was killed in Aleppo while reportedly advising the Syrian military in its battle against opposition groups and ISIS.

The city of Aleppo was Syria's most populous city before the civil war began in 2011 after Assad cracked down on anti-government protests. The government controls western areas of the city and an array of opposition groups control the east.

The opposition in Aleppo is deploying more men and weapons, including significant quantities of anti-tank missiles, to resist ground attacks by the regime and its allies.

The regime's first aim is reportedly to advance north toward the province of Idlib, nearly all of which were captured by the opposition this year.

Hezbollah has redeployed its fighters in Syria to take part in the battle in the northwest, according to sources familiar with political and military developments in Syria. A Hezbollah officer was killed last week Monday in Idlib. Hezbollah commander Hassan al-Haj was also killed in the same area in recent days.
Last Update: Oct 19, 2015 5:46 pm