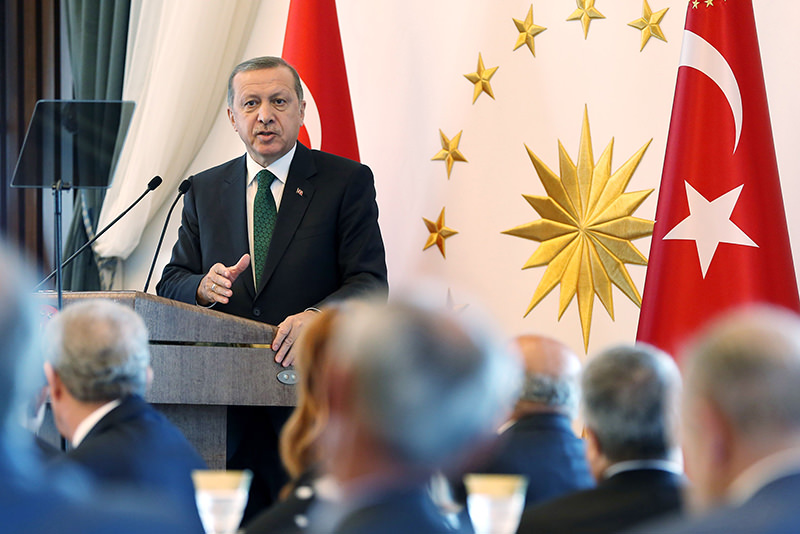 | IHA Photo
by daily sabah
Oct 20, 2015 12:00 am
Speaking at a United Nations convention on Tuesday, President Recep Tayyip Erdoğan accused the international community of deserting their conscience while thousands of people died in Syria.

Addressing the 12th session of the Conference of the Parties of UN Convention to Combat Desertification in the capital, Erdoğan said: "Unfortunately, the international community failed when crimes against humanity and nature were being committed in many parts of the world."

Erdoğan said the world just sat back and watched the killings of 366,000 civilians in Syria.

"Where is democracy, where are rights and freedoms? Does democracy exist only for sovereign powers? Is democracy not valid for the least developed and developing countries?" the president asked. Erdoğan further added that the international community failed when Palestinians and Egyptians requested their basic human rights be upheld.

Erdoğan reiterated the facts that there were nearly 2.5 million refugees in Turkey and $8 billion has been spent so far on supporting these refugees, while support from other countries has only amounted to $417 million.

"It is not possible to prevent land degradation in a world where our conscience has been deserted," Erdoğan said. Underscoring that some feel disturbed when such topics are brought up, Erdoğan said he will continue to speak frankly about the truth.

The president also said that desertification threatened around 1.2 billion people in more than 110 countries, affecting 4 billion hectares worldwide. He said that Turkey's environmental policy was on par with world standards.

Erdoğan also said that Turkey had taken serious steps to deal with the issue of desertification. "Turkey is a world leader in tackling erosion and is an exceptional country that has increased its forest area," he said. He added that the Turkish government has planted and rehabilitated around 4 million hectares of land in the past 12 years; 3.2 billion saplings have been planted in the country since 2002.