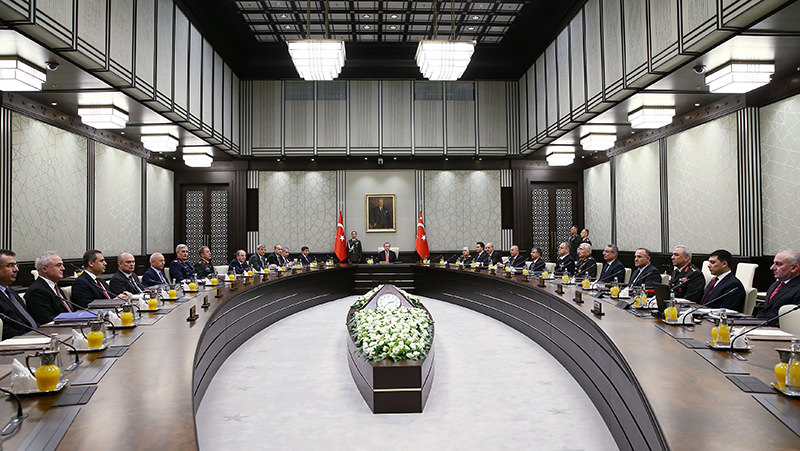 by Daily Sabah with AA Oct 21, 2015 12:00 am
Turkey's fight against terrorism will proceed with determination, a statement released following the National Security Council (MGK) meeting said, while it highlighted the importance of preserving public order in the country.

The National Security Council (MGK) convened on Wednesday under the chairmanship of President Recep Tayyip Erdoğan to discuss critical items on the agenda, including establishing security for the Nov. 1 elections and formulating a comprehensive strategy to combat terror attacks by terrorist organizations such as the PKK and ISIS. The MGK meeting was attended by all Cabinet ministers and the main topic of the agenda was the deadly Ankara bombing which left over a hundred people dead.

The council underlined "Turkey's determination in fighting against terror organizations and its extensions," it said.

The council also said that PKK offshoots in Syria should also be designated as terrorist organizations internationally, adding that the fight against ISIS would continue with determination.

According to the statement, the refugee crisis was also discussed and the council called on the international community to take concrete steps regarding the issue.

Since Oct. 1, clashes have repeatedly broken out in Israeli-occupied West Bank, East Jerusalem and the blockaded Gaza strip between Palestinian demonstrators and Israeli security forces.

The violence was at least partially prompted by repeated incursions by large groups of Jewish settlers -- usually backed by Israeli security forces -- into the Al-Aqsa Mosque compound.

While the government continues its devoted efforts to combat threats against it domestically and internationally, the fugitive leader of the Gülen Movement Fethullah Gülen faces a life sentence as prosecutors yesterday presented an indictment charging him and 67 others with an attempt to overthrow the democratically elected government. With the new indictment on the "parallel structure," a name attributed to infiltrators from the Gülen Movement in key posts in the judiciary and police, the MGK meeting reaffirmed to continue its ongoing combat against the Gülen Movement.