Assad pays suprise visit to Moscow to discuss his future 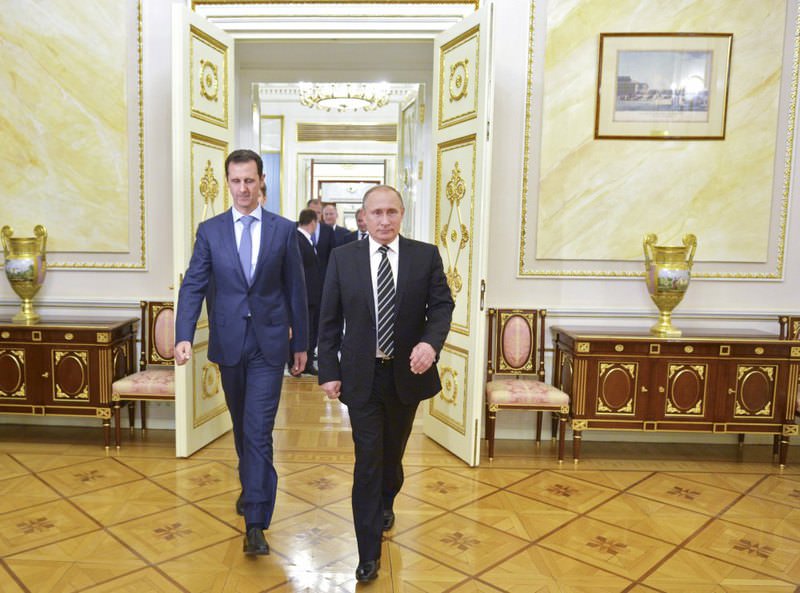 Following Assad's surprise visit to Moscow, debates on his future in a possible transition period have become more meaningful. Ankara is decisive that he has no future in Syria and lost legitimacy long ago due to killing thousands of his people

Syrian President Bashar Assad met with Russian President Vladimir Putin on Tuesday in an unannounced visit to Moscow, the Kremlin said. Assad and Putin held talks over Russia's military offensive in Syria against the Islamic State of Iraq and al-Sham (ISIS) and other groups, Kremlin spokesman Dmitry Peskov told reporters. "Yesterday evening, the president of the Syrian Arab Republic, Bashar Assad, made a working visit to Moscow," Peskov said.

According to the Russian RIA Novosti agency, a Russian delegation, led by member of the Federation Council Committee on Defense and Security Dmitry Sablin, is also paying a visit to Damascus today. Besides debates of whether Assad will be in a likely transitional period, the visit came after reports in Russia's Kommersant newspaper on Tuesday of the PKK-affiliated Democratic Union Party (PYD) planning to open a mission in Moscow.

Although the PYD's Co-Chair Salih Muslim had announced on Wednesday last week that they received 50 tons of U.S.-supplied munitions for their armed-wing People's Protection Units (YPG), contradicting what the Pentagon had said, the PYD's intention to gain Russian support is becoming less obfuscated. Predictably, Assad's first foreign visit since the four-and-half-year civil war broke out is meaningful for consolidating support from Russia. Russian jets started airstrikes in Syria last month with the pretext of fighting ISIS and other "terrorists."

Russia, however, has been accused with chiefly targeting moderate opposition groups, fighting regime forces and even civilians.

Russian airstrikes in Syria have reportedly killed 370 people since they began on Sept. 30, around a third of them civilians, a monitoring group said Tuesday.

Moscow's sudden move hosting Assad is significant considering Washington's inconsistent policy in Syria, especially in statements supporting the PYD and YPG, which are recognized as terrorist organizations by Turkey, in the anti-ISIS fight.

Washington had previously announced that it has suspended its $500 million train-and-equip program in the latest embarrassment concerning a Syria strategy that has stumbled from one setback to another. Two small groups of U.S.-trained fighters crossed into Syria from training centers in Turkey or Jordan this year, but they did not last long.

The head of the Institute of Strategic Thinking (SDE), Professor Birol Akgün, said the reason why Assad went to Moscow was to make efforts to save himself and his family from the crisis for which he has thousands of people's blood on his hands. He said: "Especially as a result of the massacre in Syria, Assad must be put on trial in an international criminal court, as seen in former Yugoslavia. Russia might even fail to prevent this. I believe that this meeting was Assad developing an exit strategy from the crisis for his future and he is ready to make any concession."

Professor Gülnur Aybet, the head of the Department of Political Science and International Relations at Bahçeşehir University, believes Assad's visit means that Russia wants to bolster its position in Syria to stay in the region for the long haul. "Given that voices in the United States and the EU, including the United Kingdom, are against Assad remaining even in a transition period, the position of Turkey is also very adamant in this respect," she added.

Ankara: Assad could stay in Moscow to ease what Syrians feel

President Recep Tayyip Erdoğan spoke with Putin on Wednesday over the phone and was informed of Assad's visit to Moscow. Erdoğan expressed his concern for an expected refugee wave following Russia's airstrikes in Syria during his call with Putin.

Speaking at the general meeting of Turkey's Retirees Association on Wednesday, regarding Assad's visit, Prime Minister Ahmet Davutoğlu said Ankara tried to convince the Syrian regime to embrace democracy and a transition period before, but later on it lost its legitimacy. "We need to dwell on formulas in which Assad leaves. I wish Assad could have stayed longer there [in Moscow], and Syrian people could feel at ease, then the real transition period would have started," he said, adding his being in Moscow is proof that Moscow supports the regime.

Previously, as a senior diplomat told a group of journalists on Monday, Ankara is ready to accept a transition period in which Assad remains in symbolic power for six months before leaving office. "Work on a plan for Assad's departure is underway. ... [Assad] can stay for six months and we accept that because there will be a guarantee of his departure," he said.

Turkey has allocated $7.6 billion for 2.2 million Syrian refugees since the Syrian civil war broke out over four years ago.

In the event Bashar Assad leaves office either before or after a transitional period, there are several destinations where he might seek asylum, including his main supporters Russia and Iran.
Moscow, however, previously declared that it will refuse to offer asylum if Assad requests it, Russian Foreign Minister Sergey Lavrov told RIA Novosti. Yet, several countries from the Commonwealth of Independent States, which is dominated by Russia, might be possible destinations for Assad that Russia might support.

Abstaining from a clear stance as Russia did, Iran might take a step back on the issue, considering opportunities it has after its nuclear talks with the P5+1 countries. Nevertheless, given the trilateral relations between Tehran, Damascus and Baghdad, Iraq might be a possible place for Assad as well.

China, one of the Syrian regime's staunch allies, is also another option.

There are several Non-Aligned Movement (NAM) countries that might accept an asylum request from Assad, including Venezuela, whose president, Nicolas Maduro, remains an ardent supporter of Assad, and has said he is "the only leader with authority in Syria."
Despite denying sending troops to Syria, Cuba is known to have sympathy for the regime in Syria. Yet, the rapprochement between the U.S. and Cuba, could cause the communist regime to stay out of the issue.

Although there is no concrete evidence that the country directly arms the regime, there are rumors that Algerian military aircraft regularly lands in Syria since the Algerian government is believed to be strongly opposed to Syrian regime change.

Again, some countries that remain disengaged from world politics, such as Costa Rica, might be a good option for Assad for possible asylum.