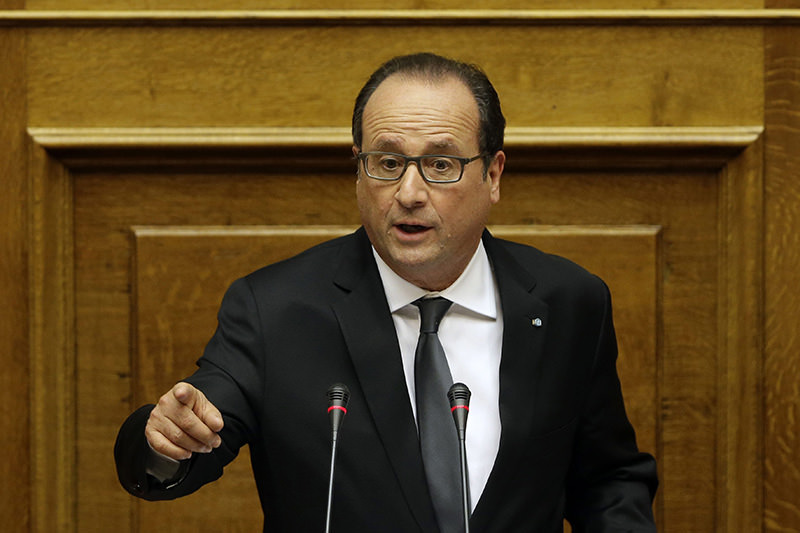 French President Francois Hollande delivers a speech to the lawmakers at the Greek parliament, in Athens, Greece, 24 October 2015 (EPA photo)
by Daily Sabah with Wires Oct 23, 2015 12:00 am
Europe should offer Turkey financial and other help to deal with the refugee crisis, French President Francois Hollande said on Friday during a visit to Athens.

"Turkey needs to meet a certain number of obligations and also watch its border but we also must help Turkey, including financially, in welcoming refugees," Hollande said.

Turkey is preparing for tens of thousands more refugees from Syria as government forces and Russian warplanes pound opposition-held areas, and officials said many would try illegally to get to Europe.

Syrian government troops and their allies, backed by Russian jets, launched an offensive against rebels battling to overthrow President Bashar al-Assad south of Aleppo, still home to two million people, a week ago.

Another offensive in Hama province, southwest of Aleppo, has also displaced tens of thousands, aid workers say. Estimates of the overall numbers on the move ranged between a U.N. refugee agency (UNHCR) figure of 30,000 to as many as 100,000.

European Union has been pressuring Turkey to do more to keep refugees on its soil and help stem the biggest migration movement the continent has seen since World War Two. The EU has proposed financial aid and faster membership for Turkey in the hope of winning its help.

But, the country is already hosting more refugees than any other country in the world with more than 2.2 million refugees. Hundreds of thousands are sheltered in the refugee camps, whereas Europe has seen 600,000 new arrivals this year.

The prime minister said: "The first topic is the fair share of the refugee burden. Turkey has been left alone in the last four years on the issue of sharing [this] burden. The process hereafter should be carried out together irrespective of [the possible financial aid to Ankara from the EU of] 3 billion euros."