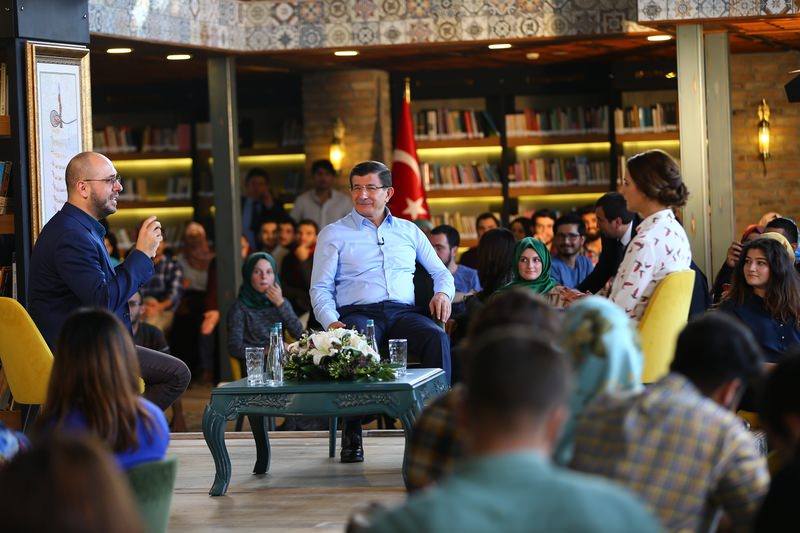 PM Davutou011flu met with youth from different backgrounds and answered their questions in Istanbul's Bau011flarbau015fu0131 district (Twitter Photo)
by daily sabah Oct 26, 2015 12:00 am
Prime Minister Ahmet Davutoğlu on Monday said an ideological war must be fought against ISIS in addition to the actual ground war against the terrorist organization.

Davutoğlu met university students at a cafe in Istanbul's Bağlarbaşı district and answered their questions in a televised interview.

"Youth generally adopt an anti-authority stance, but this is not an excuse for the [Justice and Development Party] AK Party; we need to get to know them better, and this is why I stand here: To listen to youth," Davutoğlu told his audience, while he underscored that his party values the demands and expectations of Turkey's youth population.

Davutoğlu said Turkey will not return to the days of the 1980s and 1990s, and that the fight against terror will continue without deviating from democracy.

"Youth must one day take this responsibility. Nobody can put discrimination and terror in your future. We will not allow those terror groups to put our youth into a chaos by deceiving them anymore," he said.

He also said the AK Party removed the state of emergency declared in the southeast and made great reforms for Kurdish-origin citizens, adding "There is nothing left for terrorist organization to abuse."

Davutoğlu suggested that if several media outlets label everything that the government implements as wrong, that needs to be discussed. He said: "Media is free. Everyone can support any party they choose. Everyone can put forward any political leader they want. However the most suffering issue in Turkey is the polarization in media and other areas of our society.

The meeting took place in a casual atmosphere, where the prime minister made jokes and laughed along with the university students. Davutoğlu suggested that such meetings with youth should be held regularly after the elections on a bi-monthly basis.

On Saturday, Davutoğlu went on a live Facebook interview with youth for the first time and responded to their questions online.