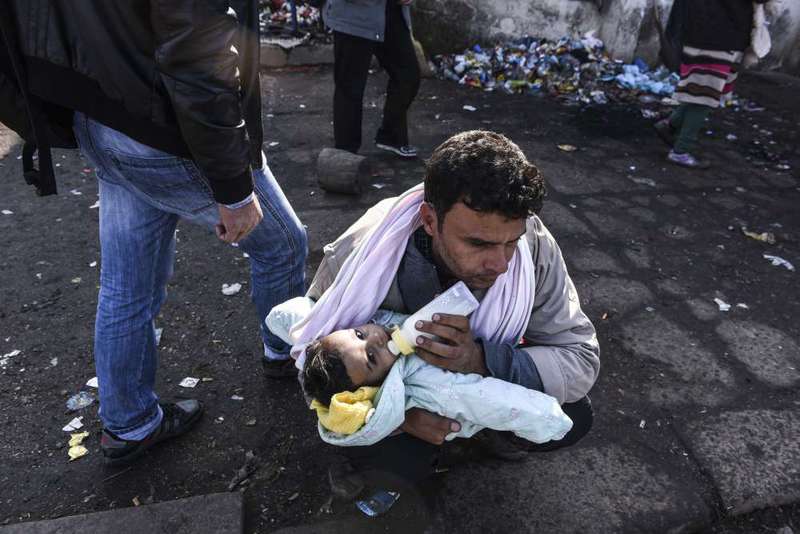 by daily sabah Oct 27, 2015 12:00 am
Turkey cannot remain indifferent to the plight of millions of innocent people, said President Recep Tayyip Erdoğan on Monday in reference to Turkey's open-door policy toward Syrian and Iraqi refugees. The government is coming under increasingly vocal criticism from opposition figures, including Republican People's Party (CHP) Chairman Kemal Kılıçdaroğlu, for its migrant policy and efforts to cooperate with the EU to resolve the refugee crisis.

Kılıçdaroğlu said any sort of agreement with the EU, which he described as turning the country into the EU's refugee camp, was unacceptable. While the government is engaged in negotiations with the EU to share the burden of more than 2.2 million refugees in Turkey, Kılıçdaroğlu said much needed jobs for locals were currently going to Syrians and called on the government to reject any proposal extended by the EU.

Republican People's Party (CHP) Chairman Kemal Kılıçdaroğlu criticized the government for taking in people fleeing the war in Syria, whose numbers now exceed 2.2 million. On the same day, President Recep Tayyip Erdoğan said Turkey could not remain indifferent to those fleeing violence in such countries as Syria and Iraq.

Kılıçdaroğlu also criticized Ankara's recent rapprochement with the EU on the Syrian refugee crisis, indicating that the government should refuse the deal.

"Leave the 3 billion euros aside, if EU countries give 13 billion euros, Turkey should not accept being turned into a refugee camp. We cannot accept that," he said while on his way to the eastern province of Malatya for a party meeting. Kılıçdaroğlu has been accused of making controversial remarks on Syrian refugees.

Speaking in the northwestern province of Sakarya at a party meeting on Sunday, Kılıçdaroğlu said: "We have a whole lot of problems. As if our problems are not enough, 2.2 million Syrian refugees came to Turkey. What are we going to do with them? Our children are unemployed. Now they are striving to employ them [refugees]."

Along with that, considering his previous statements suggesting that Ankara should cooperate more with the EU, Kılıçdaroğlu having an anti-EU stance over the latest deal is puzzling for some.

Following German Chancellor Angela Merkel's visit to Istanbul on Oct. 18, Ankara has stepped up efforts to tackle the refugee crisis and enhance relations with the EU concerning the migrant crisis and Turkey's longstanding bid for visa-free travel in the EU along with the opening of several chapters in the accession process.

Prime Minister Ahmet Davutoğlu had stressed the importance for cooperation with the EU after a joint press meeting with Merkel, saying: "The first topic is the fair share of the refugee burden. Turkey has been left alone in the last four years on the issue of sharing [this] burden. The process hereafter should be carried out together irrespective of [the possible financial aid to Ankara from the EU of] 3 billion euros."

Previously, in a speech in the southern province of Mersin where he introduced CHP candidates for the June 7 general elections, Kılıçdaroğlu pledged that the CHP would send nearly 2 million Syrian refugees who fled the civil war in their country back if it came to power with the elections. He said: "[The CHP] will send our Syrian brothers back. We will say to them, 'Sorry, but go back to your hometown.' "

In a 2014 live interview with Ahmet Hakan on CNN Türk he said that to accept 1.5 million refugees into Turkey is treason.
RELATED TOPICS