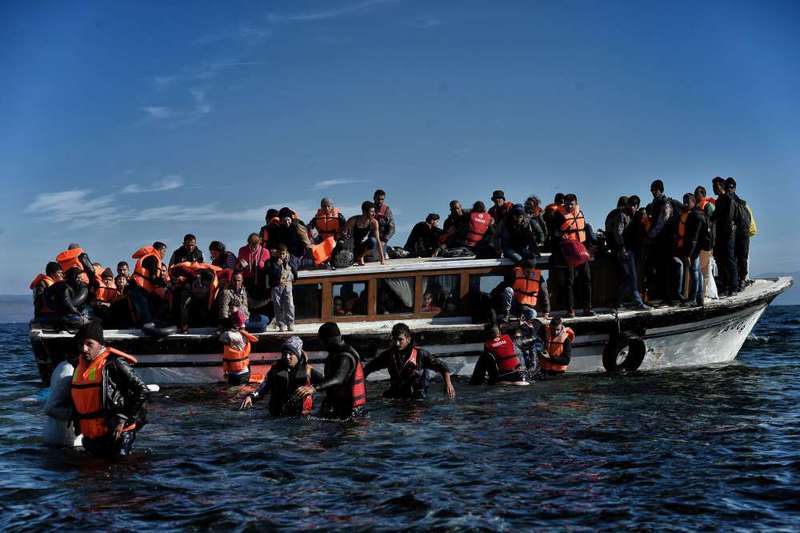 A group of refugees arrive on the Greek island of Lesbos after crossing the Aegean Sea from Turkey on Monday.
by Yusuf Selman İnanç Oct 27, 2015 12:00 am

While Arabs and Turkmens become victims of PKK-affiliated PYD's ethnic cleansing in northern Syria and Assad regime push toward Aleppo with its allies, Deputy PM Kurtulmuş said the EU's growing refugee crisis may become more dangerous than the threat of a World War III

Deputy Prime Minister Numan Kurtulmuş commented on the ongoing refugee crisis that is deeply affecting both Turkey and the EU. Speaking at a press conference held at the end of two days of conferences in Istanbul, in which several academics and members of nongovernmental organizations gave presentations on dealing with the refugee crisis and problems refugees face, Kurtulmuş said that the migration problem is global and no country can avoid being involved in it. He said that the growing refugee problem may become more dangerous than the threat of a World War III. Turkey is currently home to more than 2.2 million refugees and EU countries have been mired trying to figure out how to tackle the increasing influx of migrants.

"Turkey hosts more than 2.2 million refugees. The number is much higher than Turkey's capacity. But as a duty of brotherhood, friendship and common culture and history, we implement an open-door policy and humanitarian diplomacy," he said. While highlighting that about 2 million of these refugees have been settled in various cities, he said: "We host 270,000 refugees in 26 camps."

Touching on the increasing death toll while attempting to cross the Aegean Sea on boats, Kurtulmuş said: "This is a warning to the world. Remember Aylan Kurdi whose little body washed up on the coast. The images went viral in Europe and finally attracted their attention to the growing refugee problem." Criticizing the international community, he said: "The refugee policies of the international community have collapsed. The current policies are insufficient to overcome the problem. Intellectuals, universities, nongovernmental organizations and all related institutions must be involved to create solutions. Different circles must come together to find a common solution."

He added, however, that the refugee problem is not a cause for something, but a result of something. Citing that as many as 60 million people have been displaced from their homelands around the world, he said: "The displacement of 5 million Syrians is a result. As long as the current political situation, wars and injustice continue, the number of refugees will double in the next 15 years." He also said that displaced people are members of developing societies and host countries are developing countries, too. "Prosperous countries are reluctant to accommodate refugees. But developing countries do so. Turkey, in ratio with gross national product (GNP), is the leading country in the world in terms of accepting refugees."

At the end of the conference he gave the two main reasons for the refugee crisis and said that two proposals to fix it are on the table. As the first reason, he said: "Injustice is the main reason. The migration problem might be more dangerous than a World War III. The wealth of prosperous countries in the north will increase, but their populations will decline. On the contrary, countries in the south will become poorer, but their population will increase. The populations of wealthy northern countries compose 0.7 percent of the world [population] while they hold 44 percent of net worth in the world. However, the huge African continent holds only 1 percent. Another problem is that the aid delivered by wealthy countries is not accurate or sufficient. The number is very low. In ratio with GNP, Turkey is the country providing the most aid to undeveloped countries." As the second reason for the wave of migration, he said that those countries whose citizens are displaced suffer from a lack of democracy and from authoritarian regimes. "The international approach to the issue must be based on a strengthened ground. Pressure, oppression, internal conflicts, keeping people out of administration and dictators contribute to the migration issue," he said.

He described two proposals presented to the international community in press conferences. The first one is founding a new international institution: "We have the United Nations High Commissioner for Refugees [UNHCR], but we need a new one that will have enough of a budget and capacity for organizations for this global problem. The institution must involve partners from the civil world and be funded by all countries in ratio with their GNPs." Kurtulmuş's second proposal was establishing habitats for refugees with the aim of involving them in the economy and integrating them into society: "Refugees shouldn't be dependent on aid. They should be producing and contributing to the economy. Turkey, in assistance with the international community, is ready to build towns for these people. The towns will have marketplaces, apartments, factories and schools. In this way, refugees, among whom are hundreds of thousands of highly-skilled people, will start making their lives instead of desperately looking at their futures."

He also said that all of the refugees in Turkey can benefit from free state-run hospitals. Some 300,000 of 450,000 children receive an education and all of them will be at either state-run or private schools next year. In refugee camps, he said, there are many vocational courses for refugees, especially for women. He called on the EU to change its policy and said that Turkey does not need aid. "[If] the EU does not change its approach, it will face bigger problems. Without eradicating the causes of the problem or finding permanent solutions, the EU can't say it doesn't want to deal with the issue. The 28 countries have to determine a common policy," he said. Touching on border crossings from Turkey to Greece and Bulgaria, he said: "If any of these people say they do not want to stay in Turkey, but live in a European country [instead], we can't convince everyone to stay here. If safe zones are not established, if the war does not end, what can Turkey do to stop the influx?"
RELATED TOPICS