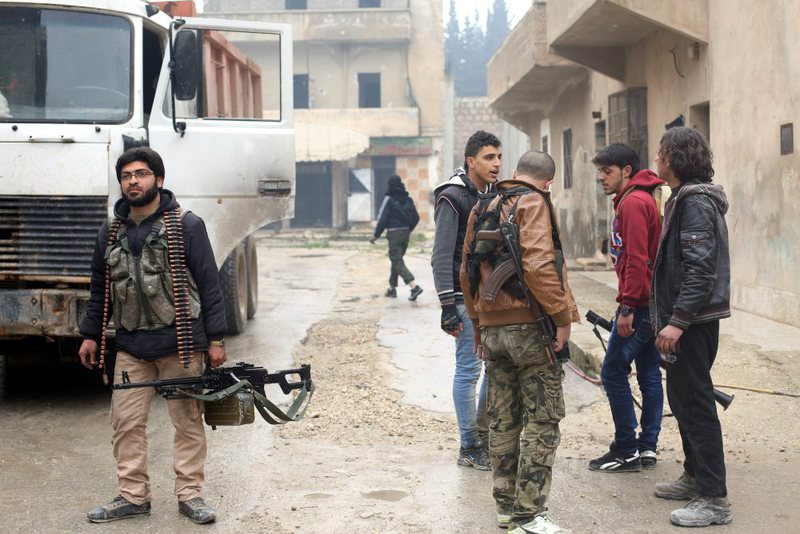 by Compiled from Wire Services Oct 28, 2015 12:00 am
Delegations from Free Syrian Army (FSA) groups did not visit Moscow, representatives of four factions fighting under the FSA banner told Reuters on Tuesday, denying Russian news agency reports that such visits had taken place.

"This talk is not correct," said Lieutenant Colonel Ahmad Saoud, head of the FSA-affiliated 13th Division group, which operates in areas of western Syria being attacked by Russian warplanes.

The spokesman for Alwiyat Seif al-Sham, an FSA group operating in southern Syria, said: "Nothing of this sort happened on our part as FSA. It is impossible for us to accept going to Moscow, and to have dialogue with it. We don't want their help."

"We contacted our friends in other areas and nobody went," added the spokesman, Abu Ghiath al-Shami.

Russian Foreign Ministry official Mikhail Bogdanov was quoted by Interfax news agency on Tuesday as saying delegations from the FSA had visited Moscow several times, including this week.

Previously on Saturday FSA had rejected the Russian offer to assist them against the Islamic State of Iraq and al-Sham (ISIS) terrorist group and dismissed Moscow's call for new elections.

"Russia is bombing the Free Syrian Army and now it wants to cooperate with us, while it remains committed to Assad? We don't understand Russia at all!" Saoud said.

Moscow began an aerial campaign in Syria on Sept. 30, saying it was targeting ISIS and other "terrorists", yet opposition groups say they have been the target of Moscow's strikes, and that the campaign is intended to prop up the Assad regime rather than eradicate ISIS.

"The main thing for us is to approach the people fully in charge of representing these or those armed groups fighting terrorism among other things," he told Rossiya 1 television station.

Lavrov also told the station that he hoped to see political progress in Syria and a move toward new elections.

"I am convinced that most serious politicians have learned their lessons and with regards to Syria a correct understanding of the situation is developing," he said.

"This gives us hope that the political process will move forward in the foreseeable future, by using outside players, to have all Syrians sit at the negotiating table."

"Of course, it's necessary to prepare for both parliamentary and presidential polls," he added.

Following Lavrov's statements Samir Nashar, a member of the Syrian National Coalition, the opposition's main political body, said the proposal of new elections now was absurd and accused Moscow of trying "to circumvent the demands of the Syrian people for Assad's departure."

"The Russians are ignoring the real facts on the ground, with millions who have been displaced inside and outside Syria, where cities are destroyed every day," he said.

"What elections are they talking about holding under such circumstances?"

Syria had held "pre-determined" presidential elections in June 2014, only in regime-controlled areas, with Assad re-elected for a seven-year term with 88.7 percent of the vote.

The election was dismissed by the opposition and condemned internationally.

The country last held parliamentary elections in May 2012, and it is in theory due to hold its next legislative vote in 2016.
RELATED TOPICS