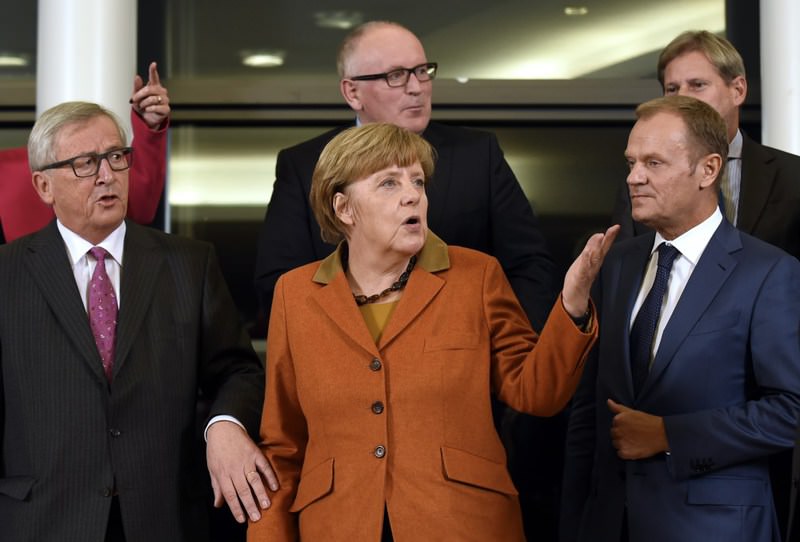 With the European Union facing arguably the biggest refugee crisis in decades, right-wing political parties are increasingly moving into the spotlight. For this reason, European Council President Tusk has pointed to possible ‘tectonic' changes in the EU and called for extreme solidarity

In the wake of tremendous influxes of refugees entering the European Union, member states have so far failed to address the issue and find an effective solution. European Council President Donald Tusk commented on the subject on his official Twitter account and hinted at the possibility of large changes in the political landscape of the EU amid the rise of right-wing political parties. "#RefugeeCrisis is perhaps biggest challenge for EU in decades. Has potential to create tectonic changes in the European political landscape," Tusk wrote. While EU policies have so far been insufficient in dealing with the refugee crisis, efforts and ideas to ease it include new collaboration with Ankara.

Whether Tusk implied possible extensive collaboration with Ankara, the rising popularity of far-right political parties in the EU or something else remains a question. Saying that what the EU is going through requires "extraordinary measures, extraordinary sacrifices [and] extraordinary solidarity," Tusk called for solidarity between EU member states. German Chancellor Angela Merkel paid a visit to Istanbul on Oct. 18 where she met with Prime Minister Ahmet Davutoğlu and President Recep Tayyip Erdoğan to discuss possible solutions to solve the crisis.

Speaking at a joint press conference at Dolmabahçe Palace, Prime Minister Ahmet Davutoğlu and Merkel shared the details of their meeting. Citing that Turkey and Germany are two friendly and allied countries working closely on political and economic issues, Davutoğlu said that he conveyed Ankara's concerns regarding the humanitarian tragedy in Syria for which no solution has been found for five years.

Davutoğlu praised Merkel's courage to not turn a blind eye to the refugee crisis unlike other heads of states in the EU that wanted to keep refugees out of their countries, and said: "There is a joint working group between Turkey and Germany that will do its best to find a mutual solution to the problem."

After Davutoğlu's speech, Merkel reflected her views following the meeting. Emphasizing that Germany and the EU will provide support of any kind to Ankara on four topics, she said: "New meetings will be held on the visa issue. We [Germany and the EU] have some expectations from Turkey regarding the refugee crisis."

Acknowledging that Turkey has carried the burden of refugees financially, Merkel said: "We know that Turkey has not received much aid for this issue. In fact, Turkey has undertaken a great task. I can also say that the EU will work on legal migration."

It was argued both in the Turkish and German media that Merkel felt compelled to ask for Ankara's help as her poll ratings in Germany have sunk as low as 35 percent. Under pressure from many quarters, Merkel and the EU are aware that they need to take action effectively and as soon as possible.

Even though the EU considers giving various concessions as well as financial aid to Ankara in return for a readmission agreement and a better control of borders to stem the flow of refugees, some still argue that Turkey should not be given the chance.

Whereas Tusk's remarks are open to interpretation as Turkey joining the EU or at least playing a significant role in solving problems together with it, the worrying rise of far-right parties is also another possibility. A very recent example is Poland, where the right-wing Law and Justice (PiS) party swept parliamentary elections on Sunday. PiS's victory gave possible signals that Polish-EU relations could deteriorate in the near future. Despite not being an EU member state, Switzerland has also recently shifted further to the right with a political party known for its anti-refugee views. Also in Sweden, a Nazi-inspired anti-refugee party has topped recent polls with more than 25 percent support.

Speaking on the subject, Mehmet Uğur Ekinci, a researcher at the Foundation for Political, Economic and Social Research (SETA) specializing in foreign and European politics, said that Tusk's remarks indicate a crisis of internal solidarity that has social, economic and political aspects.

Asserting that every EU member state hands its responsibility off, Ekinci said: "The Schengen visa system was designed to control borders, yet it cannot do so right now. EU member states also cannot send refugees back since there is no readmission agreement as of now. The EU's border policy is gradually collapsing."

Ekinci also said that the EU cannot build a consensus on the refugee crisis: "Tusk also points to the necessity of the EU taking collective action." He added that Tusk may be underlining the risk of the EU losing its function in embracing all member states and taking common action.

When asked about the rise of right-wing parties in different European countries, Ekinci called it action to reaction, and said: "As seen previously in history, Europe takes a conservative approach to preserve its identity. The question is about whether these right-wing groups will act in a hostile way."
RELATED TOPICS