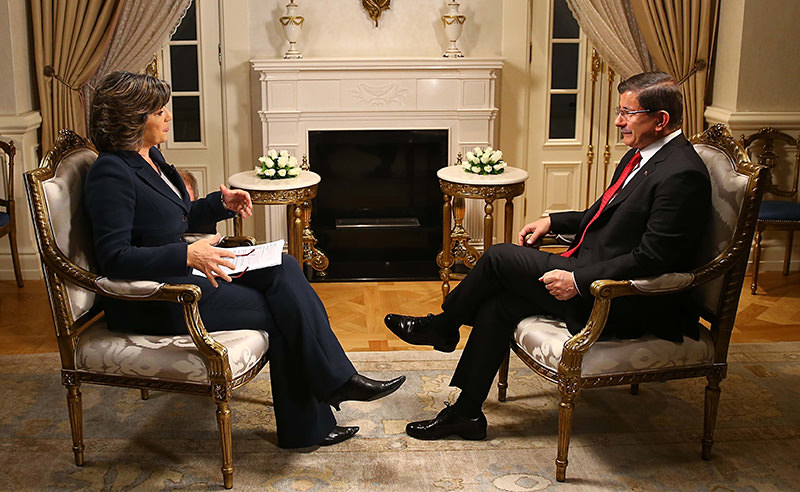 by Daily Sabah with AA
Nov 10, 2015 12:00 am
Prime Minister Ahmet Davutoğlu said Monday that the fight against the ISIS terrorist group requires an "integrated strategy" that will end the power vacuum in Syria.

Davutoğlu's remarks during a sit-down interview with CNN International's Christiane Amanpour came in his first television interview since his Justice and Development Party (AK Party) won an outright majority in the Nov. 1 parliamentary elections.

Asked whether Turkey would agree to a ground force to fight ISIS, Davutoğlu said there was a need for "an integrated strategy including air campaign and ground troops."

"But Turkey alone cannot take all this burden. If there is a coalition and a very well-designed, integrated strategy, Turkey is ready to take part in every sense," he said.

"Otherwise, if we just make a ground attack against [ISIS], but continue to have a power vacuum on the ground, instead of [ISIS] another terrorist group may emerge," he added. "We have to solve the Syrian crisis in a comprehensive manner."

Syria's devastating civil war, now in its fifth year, has claimed more than 250,000 lives, according to U.N. figures, and created conditions that have allowed ISIS to gain a foothold in the region.

For Turkey to be more involved in the elimination of ISIS, an agreement is needed by the international coalition to fight "all groups and regimes creating this vacuum and creating this problem," said Davutoğlu, including Syria's Assad regime, whose forces have been accused of killing tens of thousands of civilians with indiscriminate attacks.

"In a week, we are conducting air campaigns against [ISIS] in the coalition. It is not enough, we are observing this," he said, reiterating Turkey's call to establish a safe haven "to push [ISIS] far away from our border."

Davutoğlu challenged assertions that the U.S., Europe and Russia have suggested Assad can remain in power for some time.

"The question is when and how Assad will go," he said. "What is [the] solution? ... When one day millions of Syrian refugees decide to go back to Syria, assuming that there is peace in Syria, then this is a solution. If Assad stays in power in Damascus, I don't think any refugee will go back," he added.

The civil war, which started in March 2011 when the Assad regime responded to anti-government protests with a violent crackdown, made Syria the world's single-largest source of refugees and displaced people.

Nearly 4 million Syrians have become refugees and at least 7.6 million have been internally displaced, according to U.N. figures.

Neighboring Turkey is now the world's largest refugee-hosting country with more than 2 million Syrian refugees on its soil.

The prime minister also reiterated Turkey's objection to providing arms and ammunition to the to the People's Protection Units (YPG), the armed wing of the Democratic Union Party (PYD), a Syria-based Kurdish militant group that is affiliated with the PKK, which is listed as a terrorist organization by Turkey, the U.S., EU among other countries.

He said Turkey would be ready to help if the U.S. chose to arm Iraqi Kurdish peshmerga fighters.

"We allowed peshmerga to go through Turkey to Kobani in order to help Kobani to be freed," he said, referring to a four-month battle to drive ISIS militants from the northern Syrian town that ended earlier this year.

"If they want to help [KRG leader Masoud] Barzani and peshmerga groups in Iraq and help them go to Syria to fight against [ISIS], we are ready to help," he said.

Asked about his comments on the recent Russian plane crash in Egypt's Sinai peninsula, Davutoğlu said it was "a big crime against humanity."