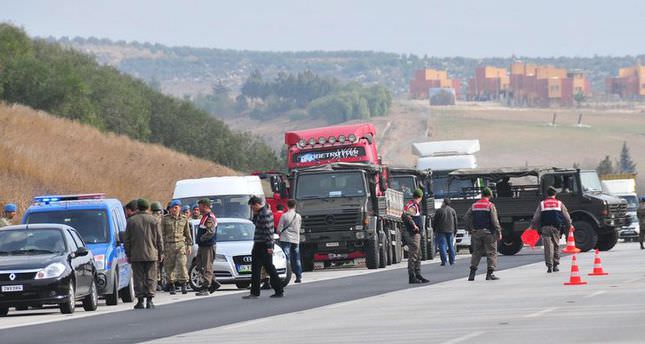 by Anadolu Agency
Nov 29, 2015 12:00 am
Three high-ranking army officials were arrested Sunday on charges of espionage and leading an armed terrorist organization.

General İbrahim Aydin and a retired colonel, Burhanettin Cihangiroğlu, have been found guilty of forming and leading an armed terrorist organization as well as spying and trying to oust the Turkish government.

General Hamza Celepoğlu was also accused of forming and leading an armed terrorist organization and of trying to overthrow Turkish government by Istanbul prosecutor, İrfan Fidan.

The three suspects were called to an Istanbul courthouse on Saturday as part of an investigation involving the search of trucks belonging to the Turkish intelligence (MİT) in 2014.

In January that year, several trucks were stopped by the local gendarmerie in southern Adana and Hatay provinces on the grounds that they were loaded with ammunition, despite a national security law forbidding such a search.

Turkey's Interior Ministry said at the time that the trucks, which were reportedly carrying arms into northern Syria, were in reality conveying humanitarian aid to the Turkmen community in the war-torn country.

On Thursday, two prominent journalists were arrested after publishing stories on the alleged arms smuggling to Syria.

Can Dündar, editor-in-chief of newspaper Cumhuriyet, and the daily's Ankara bureau chief, Erdem Gül, are accused of espionage and of aiding an armed group.

The newspaper where both worked had published photographs and video footage purportedly showing arms-laden trucks near the border with Syria.
Last Update: Nov 30, 2015 12:41 am