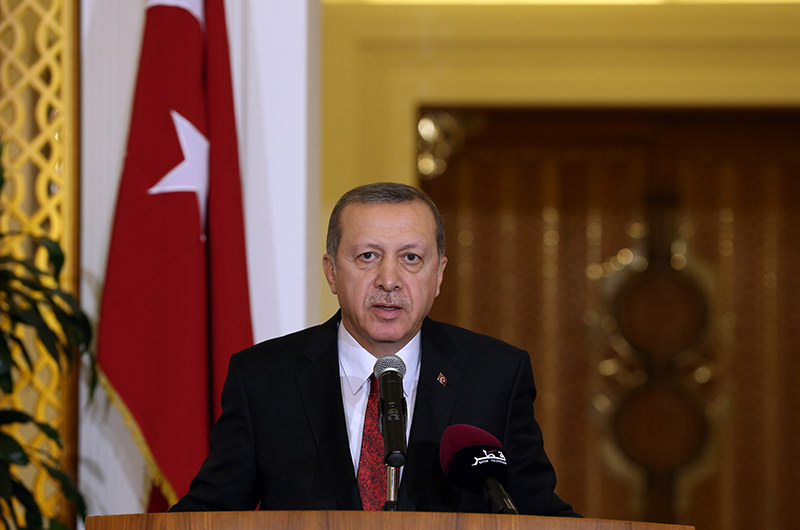 | AA Photo
by Daily Sabah Dec 02, 2015 12:00 am
President Recep Tayyip Erdoğan on Wednesday dismissed and criticized Russia's allegations that Turkey buys oil from Daesh, saying that he would step down if Putin proves his claims, while he condemned the killing of civilians under the pretext of anti-terrorism operations in Syria.

Speaking at Qatar University, Erdoğan questioned the motives behind Russia's operations in Syria, as he noted they directly support Assad's oppressive regime, which has killed over 340,000 civilians in the past five years.

He reiterated once again that Turkey has no intention to escalate the situation or act based on emotions, saying "We will do whatever is prescribed by international diplomacy" and dismissed Russia's allegation that Turkey buys oil from Daesh.

He challenged Putin once again to prove his 'baseless allegations' and said "The moment they can show proof of Turkey buying oil from Daesh, I will resign, and likewise those who cannot prove their allegations should resign."

Previously, Erdoğan had stated that Turkey buys its gas and oil only from officially known sources, including Russia, Iran, Azerbaijan and Northern Iraq, as well as LNG from Algeria and Qatar.

"Adding fuel to the fire benefits no one," the president said and added that Turkey is saddened by the disproportional responses of Russia 'to an incident in which the whole world agrees Turkey is right.'

He continued by saying that Turkey will take its own measures if Russia's disproportional responses continue.

Erdoğan noted that he had previously warned Russian President Vladimir Putin about violating Turkey's airspace, and the latter had apologized and said it would not repeat, but they violated it again on November 24.