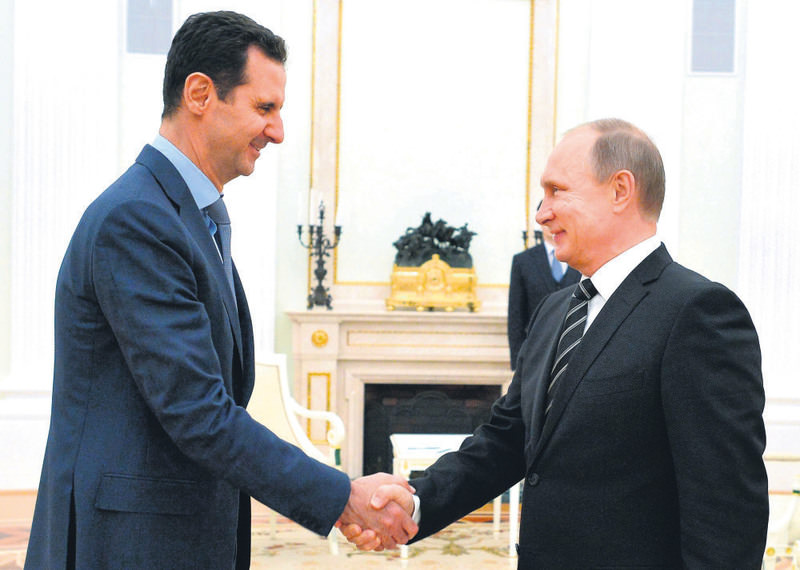 Russian President Vladimir Putin (R) shakes hand with Syria's Bashar al-Assad in the Kremlin in Moscow on Oct. 20.
by Daily Sabah with Wires Dec 03, 2015 12:00 am

During his visit to Qatar on Wednesday, President Erdoğan said ‘nobody has the right to slander Turkey', referring to Russia's accusations that Turkey buys oil from DAESH. Meanwhile, a Russian opposition leader, together with German and U.S. officials, brought up allegations that Russia is actively involved in Assad regime buying oil from the militant organization

Although previously claiming that it possessed proof of Turkey's oil dealings with DAESH, Russia backpedaled Tuesday saying it cannot share the information due to national security concerns.

Presidential spokesman Dmitry Peskov said, "What is important now is not to have this information and use it to prove something but to use it to fight terrorism."

Putin claimed Turkey shot down a Russian military jet last week because it was targeting the oil trade between Turkey and DAESH. Turkey maintains that the SU-24 bomber was shot down after ignoring repeated warnings that it was violating Turkish airspace on Nov. 24.

Along with Russia's stepping back from its remarks, dissident voices in the country even claim that it is actually the Russia-backed Syrian regime that buys oil from DAESH.

World famous Russian chess champion and opposition leader Garry Kasparov criticized Putin's stance on Assad together with his claims on the oil trade issue, indicating that it is Russia that profits from working with DAESH and the Syrian regime.

"Putin helps Assad kill civilians and destroy all opposition forces except ISIS [DAESH], with whom they are doing a nice oil business. Ally vs. terror?!" Kasparov said on his Twitter account on Nov.27.

He added: "Assad and Putin do profitable business with ISIS [DAESH]. They don't care about Syria or Russia, only money and the power to keep it."

The prominent opposition figure in Russia has also slammed the Putin administration's decision to cease food imports from Turkey and end visa-free travel with Turkey after the downed jet incident. He said: "Putin blocks Turkish imports and ends visa-free travel. As usual, it's his economic actions that hurt average Russians, not those of enemies," Kasparov tweeted.

He also tweeted about the Moscow-imposed ban on tourist packages to Turkey, as well as the suspension of flights to Egypt: "If Egypt and Turkey are off the list, the foreign tourism market is nearly dead for most Russians."

A Syrian-Russian businessman with close links to Assad, George Haswani, has reportedly been facilitating oil sales between DAESH and the regime government, according to a statement issued by the U.S. Department of Treasury on Wednesday last week.

The U.S. Treasury Department said it sanctioned Haswani, along with three other individuals for providing support to the Syrian government, as the latest salvo in an effort to cut off the flow of funds to the terrorist group. The government of Assad had also agreed to purchase DAESH oil, a Treasury official said last year.

President Erdoğan had previously pegged Haswani as a middleman for the DAESH oil trade. Speaking in Paris during the first day of the UN Climate Change Conference on Monday, he stated that a Russian-Syrian citizen has been buying oil from DAESH and then selling it to the Assad regime.

DAESH, which has been described by U.S. officials as the wealthiest terrorist group of its kind, is believed to derive much of its funding from oil fields seized from the Syrian government. DAESH sells the oil through long-standing smuggling networks, experts and officials say.

The EU sanctioned Haswani in March, and, at the time, he denied the accusation that he bought oil from DAESH militants for the Syrian government, telling Reuters by phone that the EU had no evidence to back up the claim.

However, what Haswani said was recently refuted by the German government. According to Berlin, the Assad regime buys oil from DAESH, which Damascus had previously designated as its enemy.

German Foreign Ministry deputy spokeswoman Sawsan Chebli said at a news conference in Berlin on Tuesday that there was evidence of oil transactions between the Assad regime and DAESH.

When asked about President Putin's claim that Turkey was buying oil from DAESH, Chebli said that German authorities have no information supporting these particular claims.

"But what we know for example is that the Assad regime has received large amounts of oil from ISIL [DAESH]. We have evidence; we have indications showing that this is the case," she added.

"We do not see such accusations without any evidence as helpful. We believe that the international community should focus strengthening the fight against ISIL [DAESH] and refrain from everything that can strengthen ISIL," he stressed.

Russia's top brass on Wednesday accused the Turkish president and his family of personally benefiting from the illegal oil trade with DAESH militants. Speaking to dozens of foreign military attaches and hundreds of reporters in Moscow, Russian Deputy Defense Minister Anatoly Antonov said Russia has evidence showing that Erdoğan and his family were linked to the DAESH oil trade. The defense ministry officials showed the journalists what they claimed were satellite images depicting trucks carrying oil from DAESH-occupied areas in Syria and Iraq into Turkey. They did not, however, provide any evidence to back up the claims.
RELATED TOPICS