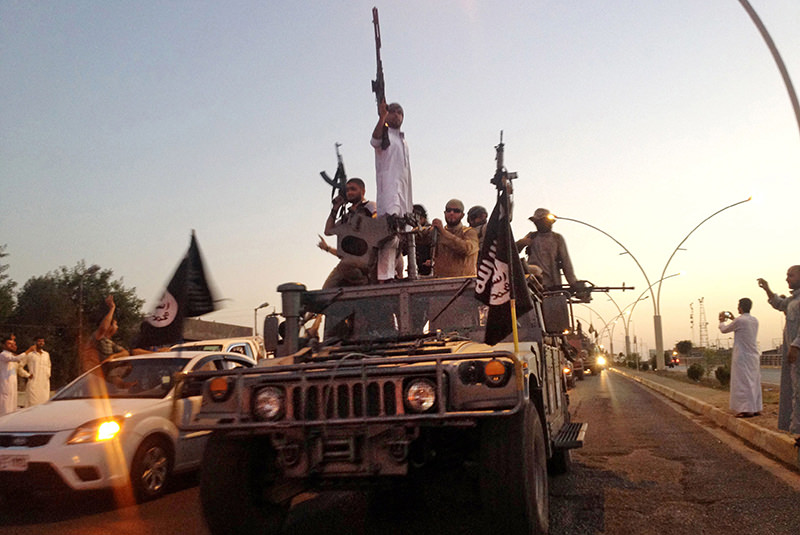 In this June 23, 2014, file photo, fighters from the Islamic State group parade in a commandeered Iraqi security forces armored vehicle down a main road at the northern city of Mosul, Iraq (AP Photo)
by Daily Sabah Dec 07, 2015 12:00 am
The northern Iraqi city of Mosul, which was occupied by Daesh terrorists in June 2014 and is currently administered by the terrorist administration, has recently become the main topic of heated debates following the deployment of 150 Turkish troops to train moderate opposition forces.

Many analysts claim the liberation of the city is essential to downgrade the terrorist organization in the region, as it was during the occupation of Mosul that Daesh drew the world's attention by establishing a city-state like administration and it was the city where the U.S. suffered the most losses during the occupation of Iraq, thus having a strategic position regarding the ongoing conflicts in the region.

For Ardan Zentürk, who writes for Turkish Star Daily, the occupation of Mosul by Daesh terrorists is a "foreign invasion" for the people of Iraq, and it is necessary for moderate Sunni opposition to take control of the city.

"The fact that the Kurdish administration in Mosul and its surroundings do not take an active role in the fight against Daesh is based on this sectarian sensitivity," Zentürk said in his column on December 6, adding that a contrary scenario may flame up the war for domination over Mosul, potentially making it a new ground for Sunni-Shia conflict.

According to Kurdistan Democrat Party's (KDP) Mosul head Saeed Mamozini, Daesh killed over 10,000 people in Mosul in a year, while 700,000 people were forced to flee their homes. Moreover Daesh executed 1,401 people for 'spying.'

"Mosul has become an open-air prison," Mamozini had previously said, noting that there is no money, electricity or jobs in the city, which allowed the terrorist organization to exploit the dire situation and recruit new militants in return for a salary.

Abdülkadir Selvi, who writes for Yeni Şafak daily, has said in his column that the main goal of training provided for the opposition forces in Iraq should be to take over the control of Mosul from Daesh terrorists, which would inflict a heavy blow to the terrorist organization.

"Daesh obtains a significant amount of its power from Mosul," Selvi said noting that the terrorist organization was able to exploit the funds in Iraq's Central Bank, and obtained the weapons given to the Iraqi Army by the U.S. when they invaded the city.

Having two strategic points including Sinjar –which Daesh recently lost- and Tal Afar, the terrorist organization only has Tal Afar left, which Selvi claims should be taken over, as Sinjar was recaptured with the training provided by Turkey to Kurdish Peshmerga forces.

Meanwhile, Iraqi Prime Minister Haidar al-Abadi opposes the deployment of troops on Iraqi soil, while former governor of Mosul Atil el Nujaifi has told Al-Jazeera that the Iraqi administration were informed about the deployment of Turkish troops for training purposes in Mosul. He furthermore expressed his gratitude for the support given by the Turkish state to Iraq, as 'a citizen of Mosul' rather than a state official in exile.

On Sunday, Prime Minister Ahmet Davutoğlu sent a letter to Iraqi Prime Minister Haider Al-Abadi in which he emphasized Turkey's commitment to cooperation with Iraq, saying "We will not deploy more troops to Bashika until your concerns about the matter are eased." He also added that Turkey will continue to support Iraq in fighting against Daesh terrorist organization.

"We want to further and deepen our coordination with the Iraqi government in the fight against terror," Davutoğlu added in the letter.