Erdoğan: Turkey to further show its humanitarian stance with or without EU 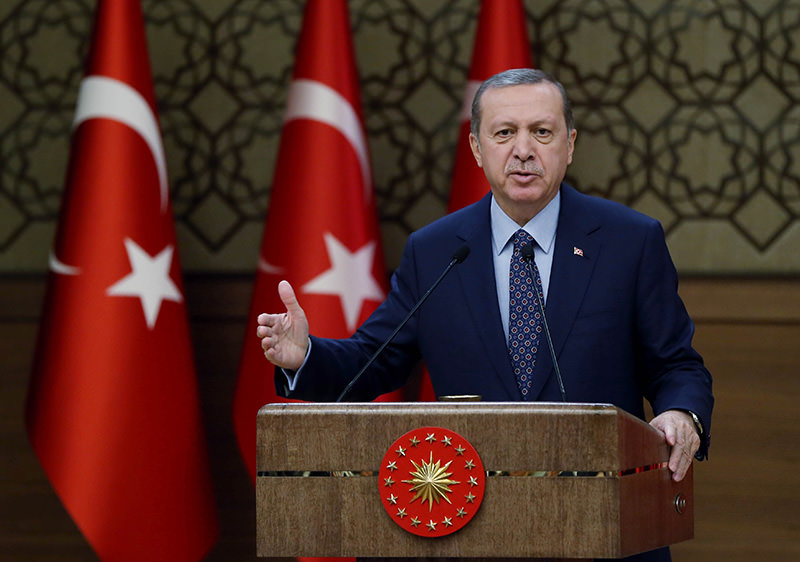 by Daily Sabah Dec 08, 2015 12:00 am
President Recep Tayyip Erdoğan on Tuesday reiterated that Turkey, as a country that has sheltered more than 2 million refugees, will continue to keep its humanitarian stance toward the crisis in spite of those that have grown aware of it after the surfacing of the shocking photos of Aylan Kurdi, a 3-year-old Syrian child whose dead body washed ashore off the Turkish coast.

Arguing that Europe has supposedly been interested in the matter, Erdoğan reaffirmed that Turkey will continue to show its humanitarian stance in the presence of those who approach it due to their security concerns. Erdoğan also picked on the EU with regards to the financial aid pledged to Turkey, and issued a warning to the 28-nation bloc: "We have already spent $9 billion. We will continue to help our brothers and sisters whether the EU provides that aid or not. No one should boast about showing kindness." Erdoğan said. He added that Turkey has overcome the issue without any serious help.

"Their assistance will only ease our efforts to help the refugees" Erdoğan said, adding that the funds will not benefit Turkey's own interests, but will solely serve the needs of refugees.

A draft action plan was previously introduced in early October. According to the plan, the EU will give 3 billion euros to Turkey. In turn, Ankara will pledge to better control its borders and stop refugees from illegally entering the EU.

The two sides met on Nov. 29 in Brussels to further negotiate on the draft action plan and find an effective solution. As once more agreed upon in the plan, the EU pledged to provide 3 billion euros to Turkey in installments with the aim of easing its burden.

Despite Erdoğan's statement with regards to further providing assistance to refugees regardless of any European aid, Prime Minister Ahmet Davutoğlu emphasized that "Turkey is not a concentration camp" for those fleeing the war in Syria. Davutoğlu repeatedly stressed that the first priority for Ankara is "the fair share of the refugee burden." In addition to the pledged financial aid, Turkey insists on the alleviation of the heavy burden that has been on its shoulders for nearly five years.

Commenting on the terror issue, Erdoğan reasserted that Turkey will not simply target terrorists who cause tremendous distress to locals in the region, as it is capable of "stamping out" terrorist organizations. "Our state is conducting an effective fight within the borders of the law. One-by-one, neighborhoods are cleansed of the members of terrorist organizations with curfews imposed when necessary," Erdoğan said. "There is no stopping here, we will continue with the same resolve," he added.

Erdoğan addressed the locals and urged them join in solidarity with the state. "This state will not leave you alone. The camps [of the PKK] are being brought down in ruins by our security forces … Know that your state is by your side against this dark organization and you also side with the state," he said.

With regard to the PKK's recent attack on a historic mosque in the Sur district of the southeastern province of Diyarbakır, Erdoğan called on the people in the region to realize that the terrorist organization targets their material and nonmaterial entities.

The 16th century mosque in Sur was the target of an attack in the early hours on Monday by terrorists armed with homemade explosives. As flames engulfed the building, police and firefighters rushed to the scene. However, terrorists in the area opened fire on the crews, stopping them from extinguishing the fire in an area where a curfew was in place to stop terrorists. It is also located in an area where the terrorists dug ditches on the streets to protect them during street clashes and set up explosive-laden booby traps. The area also houses several other historic mosques as well as Armenian Catholic and Protestant churches.