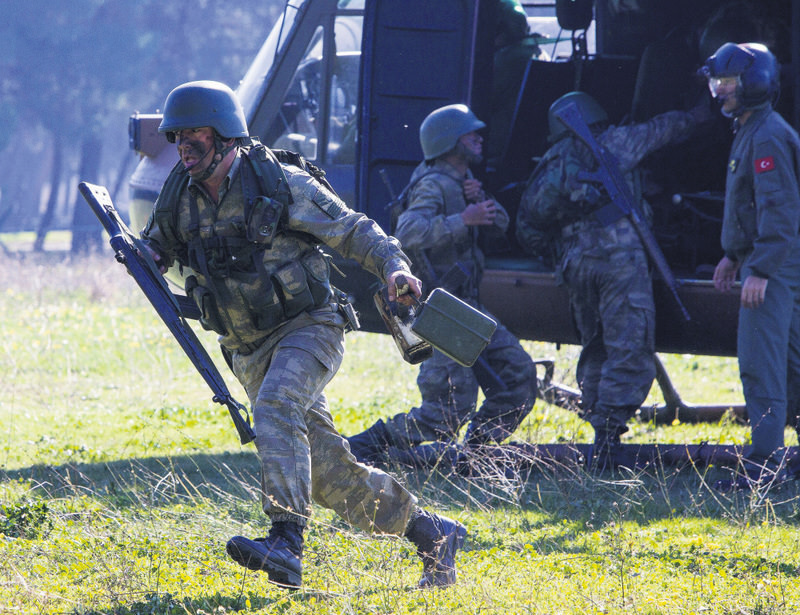 Members of Turkish Armed Forces (TSK) conducting a training in Edremit district of Balu0131kesir province.
by Daily Sabah Dec 08, 2015 12:00 am

The decision to shoot down the Russian jet that violated Turkish airspace last month is still supported by 65 percent of Turkish society, a public opinion poll conducted by MAK Consultancy showed on Monday. 5,500 participants from 55 provinces participated in the study between Dec. 1 and Dec. 4. Along with the wide support shown for Turkey's decision to fire on the Russian jet, 61 percent of the participants approve of the government's policies in response to the crisis with Russia, while 59 percent disagree with the idea that Turkey will face an economic crisis or natural gas shortages. According to the poll, the ruling Justice and Development Party (AK Party) increased its support by 4 percent and would get 53.5 percent of the votes if another election was held today.

The pro-Kurdish Peoples' Democratic Party (HDP), which narrowly passed the 10 percent threshold with 10.7 percent during the Nov. 1 general elections, lost even more support and would fall below the threshold with 9.5 percent if an election were held again.

As for the other two main opposition parties, both of which are struggling with intra-party conflicts, a decline in support was recorded. While the Republican People's Party (CHP) would only receive 24.5 percent of the vote, according to the most recent survey, the Nationalist Movement Party (MHP), which received 11.9 percent of the vote during the Nov. 1 general elections, would barely pass the threshold with 10.5 percent.When asked what was the most important issue facing the country, "terror" took first place with 23 percent, "economic problems" followed with 21 percent and then "Russia's downed jet" with 20 percent.

Turkey has intensified operations against the PKK after the terrorist organization's decision to end the ceasefire with the state on July 11. Many terrorists have been killed in operations since July 24. Terrorist camps and ammunition depots have also been destroyed, limiting PKK capacities both in Northern Iraq and Turkey.

Security forces have been conducting counterterrorist operations across Turkey after a DAESH suicide bombing killed dozens of people in Suruç on July 20. Another terrorist attack killed more than 100 people in Ankara on Oct. 10. According to the survey, 47 percent of participants approve of a future cross-border operation against the militant organization.

Turkey is constantly being accused of pressuring anti-government media outlets; however, bans imposed by election and media watchdogs shows otherwise. Many TV channels regarded as pro-government have also received harsh bans after the Nov. 1 elections, drawing criticisms from members of the press and public. The Radio and Television Supreme Council (RTÜK) imposed 60 program bans on news channel a Haber alone, which is the most watched news channel in Turkey. The bans constitute a violation of press freedom and free speech, according to 68 percent of the respondents in the MAK survey.
RELATED TOPICS