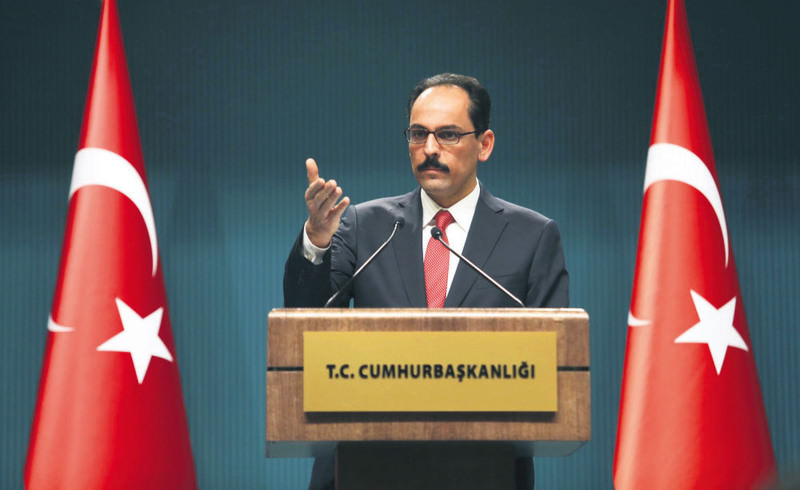 Presidential spokesman Kalu0131n at a press conference on Wednesday at the Presidential Palace.
by Daily Sabah Dec 10, 2015 12:00 am

Amid speculation over a possible improvement in Turkish-Israeli relations, presidential spokesman İbrahım Kalın on Wednesday said that Israel must fulfill Turkey's demands for both countries to advance relations. The statement also rules out a possible gas trade between the two states. Underscoring that Turkey put forth three conditions to restart relations with Israel, Kalın affirmed that Israel has so far fulfilled only one of them when it apologized for the Mavi Marmara incident.

"Our second and third conditions are yet to be met. And those conditions are compensation for the Mavi Marmara and lifting the embargo on Gaza," Kalın said, adding that there is "no possibility" of bridging relations with Israel unless it meets Turkey's demands.

Israeli Prime Minister Benjamin Netanyahu previously stressed that Israel held talks with Turkey and other states on the issue of selling natural gas. He also asserted at the Jerusalem Post Diplomatic Conference late November that Israel is looking to better relations with Turkey.

In addition, Netanyahu on Monday night appointed National Security Adviser Yossi Cohen to head the Mossad intelligence service. Cohen is expected to dwell on energy issues and develop relations with certain states. One day before his appointment, Cohen signaled that the suspended relations with Turkey would be amended. "Israel's place in the Middle East is increasingly challenged, and it will be reinforced by cooperation with our neighbors, particularly Egypt, Jordan, Cyprus, Greece and Turkey. It is in our interest to forge strategic economic relationships with these states."

Despite Netanyahu's overtures with regards to a better era for Turkish-Israeli relations, it still remains a question as to whether the Israeli government will agree to fulfill Turkey's demands. Even though Netanyahu has hinted at better relations with Turkey in the near future, his insistence on not abolishing the blockade on the Gaza Strip appears to be a tough obstacle.

The energy issue seems to be the only common ground for Israeli and Turkish interests, but the war in Syria may also help the two countries open a new era. Turkey and Russia are in a rift over the Syrian war, as Russia, along with Iran, staunchly support Bashar Assad and the Lebanon-based Shiite militant group Hezbollah, which is considered a terrorist organization by Israel.

Opposing the existence of Hezbollah in Syria seems to be another mutual interest for Turkey and Israel.

Presidential spokesman Kalın also commented on the recent incident on the Bosporus Strait. The incident occurred on Dec. 4 when a sailor held a shoulder-held missile-launcher on a Russian ship. Kalın rebuked the move and labeled it as an example of a "childish attitude." President Recep Tayyip Erdoğan and Prime Minister Ahmet Davutoğlu as well as Deputy Prime Minister Numan Kurtulmuş previously took the same stance, calling it a childish move.

Turkish-Russian relations have soured following the downing of a Russian military jet on the Turkish-Syrian border. While the Turkish side defended Turkish security forces actions in accordance with engagement rules, the Russian side labeled the incident "a stab in the back." In the wake of the downing of the jet, Turkey published radar images of the Russian jet and audio recordings, in which the Russian pilot is warned multiple times. Turkey previously said that the Russian pilot was warned 10 times before being shot down.

Turkey also levied criticism at Russia after the Kremlin imposed sanctions on Turkish goods and unilaterally canceled visa liberalization. Ankara advised the Kremlin against such undiplomatic moves and called for a healthy dialogue between the two states. It remains to be seen whether the Russian side would ease the tension and sit at the table with Turkey. Russian President Vladimir Putin, however, appears to be putting obstacles in the way. Putin on Wednesday asserted that even if the black box of the downed Russian jet proves Turkey right, Russia's stance towards it would not change in any way.

'Russian strikes do not target DAESH'