Merkel asserts Assad has no future in Syria 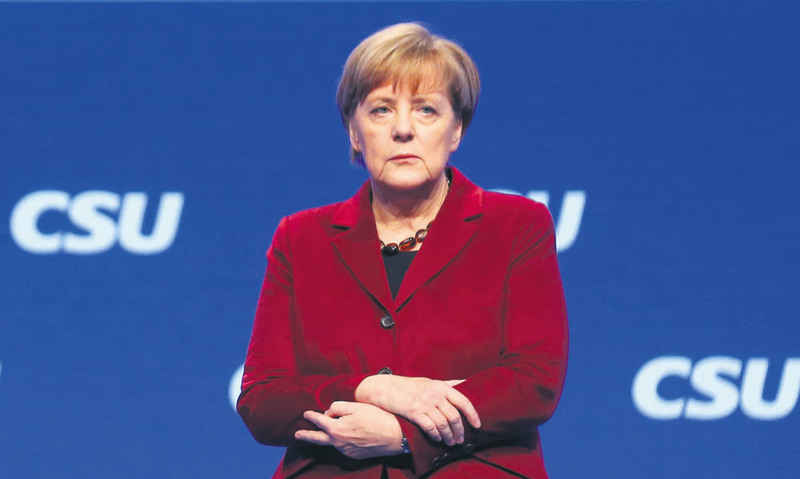 by Daily Sabah with Wires Dec 14, 2015 12:00 am
Having agreed to participate in airstrikes launched by the U.S.-led coalition, German Chancellor Angela Merkel on Saturday ruled out any possibility for Bashar al-Assad to have a role in the transitional period in Syria and assured that the army loyal to the Assad regime will have no room in the coalition to fight DAESH.

Speaking to German dailies Badischen Neuesten Nachrichten and Augsburger Allgemeinen in an interview, Merkel said: "The international alliance against the IS [DAESH] does not include Assad and his troops," adding that he still drops barrel bombs on his own people. "There cannot be a future at the top of the state for him."

A German Defense Ministry spokesman also told reporters on Nov. 30 that Germany's call for a broader alliance against DAESH and closer cooperation among the actors in the region did not involve the forces of the Assad regime.

Merkel, however, previously in late September said Assad should be involved in any Syrian peace talks amid pressure from the rising number of refugees from Syria. "We have to speak with many actors; this includes Assad, but others as well," Merkel said. "Not only with the U.S., Russia, but with important regional partners, Iran, and Sunni countries such as Saudi Arabia."

In addition, Merkel also commented on the refugee crisis. Pointing to Assad rather than DAESH for the reason why refugees flee their land and make their way to Turkey and Europe, Merkel said: "Syrians who have applied for asylum in Germany have fled their homes because of Assad and not because of ISIS [DAESH]."

Underscoring that DAESH is a big threat for Europe and runs a regime of fear in parts of Iraq and Syria, Merkel confirmed that German fighter jets will participate in the U.S.-led coalition from an airbase in Turkey.

In a bid to answer France's appeal for help, German parliament approved joining the 60-nation combat mission against DAESH in regions of Syria and Iraq. As part of the approved plan, Germany will deploy six "Tornado" reconnaissance warplanes, a tanker aircraft and warship to support the international coalition along with the deployment of up to 1,200 military personnel.

The $142 million mandate will end on Dec. 31, 2016, with the possibility of further extensions.
RELATED TOPICS