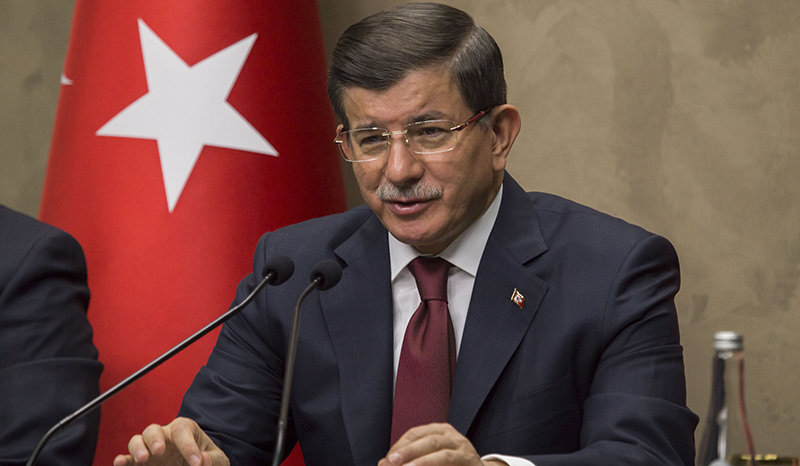 | AA Photo
by Nurbanu Kızıl Dec 15, 2015 12:00 am
Prime Minister Ahmet Davutoğlu said on Tuesday that Turkey supports and defends Iraq's territorial integrity more than any other country in the region.

Davutoğlu said that he discussed the situation regarding the deployment of Turkish troops in Bashiqa Camp with US Vice President Joe Biden.

"Turkey's policies in Iraq are quite clear and ethical" Davutoğlu said, and added that nobody should question Turkey's goodwill regarding this matter.

"Similarly, Turkey has a principled stance regarding the fight against terrorism" the Prime Minister said, and continued by adding that Turkey continues to fight Daesh and PKK terrorist organizations.

Davutoğlu also underscored that Turkey pays utmost attention to ensure that diplomatic relations proceed in positive manners, and said that he is planning to meet with Iraqi Prime Minister Haider al-Abadi as soon as possible.

Meanwhile, Turkey has welcomed the formation in Saudi Arabia of a 34-nation military coalition to fight terrorism, saying that it was the best response to those who want to exploit Islam for their terrorist agendas, underscoring that it was a 'step in the right direction.'

He said that Turkey is ready to contribute in the fight against terrorism, regardless of the identity and goals of the terrorists.

Turkey said the 150 soldiers and up to 25 tanks were stationed at Bashiqa to protect servicemen training Iraqi volunteers to fight Daesh.

According to the statement released by the Prime Ministry on Sunday, Davutoğlu informed Al-Abadi about the military training program currently in progress in Bashiqa, duties and activities of Turkish soldiers and current developments about the matter.
Last Update: Dec 15, 2015 11:51 am
RELATED TOPICS