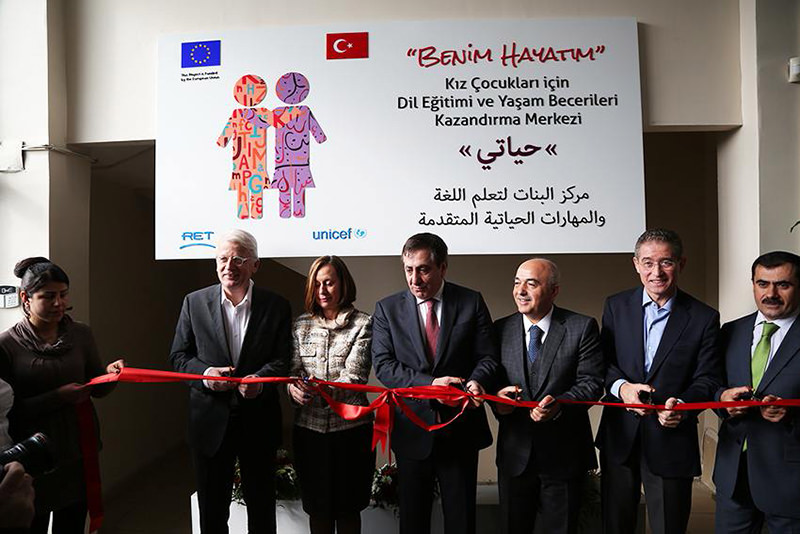 by Merve Aydoğan Dec 16, 2015 12:00 am
The worst humanitarian crisis since World War II enters its fifth year as both Bashar Al-Assad's regime and the Syrians who seek asylum in Turkey hold on to dear life. The "My Life" center is the first safe haven for female Syrian refugees and disadvantaged Turkish girls in the southeastern province of Şanlıurfa. The center opened on Monday with the attendance of the head of the EU delegation to Turkey, Hansjörg Haber, the UNICEF representative in Turkey, Philippe Duamelle, Arlette Conzemius, the Luxembourg Presidency of the Council, Yusuf Büyük, the deputy undersecretary of the Ministry of National Education, and the Şanlıurfa governor, İzzettin Küçük. The center was financed by the EU Syria Regional Trust Fund (Madad) and established in cooperation with the United Nations Children's Fund (UNICEF) and Refugee Education Trust (RET).

At the opening ceremony, Hansjörg Haber said that the EU admires and respects the efforts made by Turkey during the Syrian crisis and went on to stress that Turkey needs the most help in aiding refugees as the country hosts the most refugees. The EU delegate to Turkey stated, "I would like to reiterate that today's inauguration gives a good example of the solidarity of the EU and its determination to support Turkey. The name of this center, "My Life," is also a demonstration that the conditions of refugees can be improved, and is therefore both an incentive and an encouragement to continue and broaden our cooperation." Elaborating on Haber's remarks, UNICEF spokesman Duamelle said that the center aims to reach about 3,000 girls in and around Süleymaniye. Emphasizing the significance of the center, Duamelle said, "This safe space is critical to the protection and empowerment of girls affected by the conflict in Syria."

Speaking to Daily Sabah, the school's director of administration, Zeynep Arslan, said there are currently about 400 students at the center, the majority of them being Syrian refugees. Arslan says that there are also roughly 20 Turkish girls and one Iraqi at the center, adding that most of the Syrian refugee girls came here after escaping from Kobani and that many of the others came from Aleppo, Raqqa and Deir ez-Zor and Tel Abyad. Arslan says that the biggest challenge for the girls is transportation as there are no school buses for them.

She explained that the main aim of this center is to integrate Syrians into Turkish society and overcome the prejudices Syrian refugees are facing. As the center's administration director, Arslan underlines that there are students as well as parents who need psychological support due to the inability to get over war trauma. Aided by the EU's contribution of 12.5 million euro, UNICEF aims to improve access to education as well as psychological and communal support for Syrian children in Turkey while supporting resilience and social inclusion for the girls.
Last Update: Dec 16, 2015 10:45 am
RELATED TOPICS