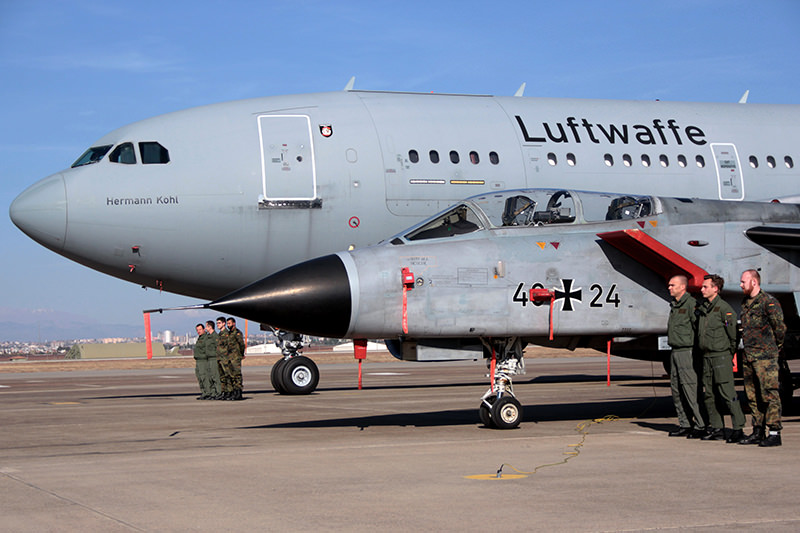 German airmen stand next to a fighter jet and a transport plane after the US Defense Secretary Ash Carter visited the Incirlik Air Base near Adana, Turkey, Tuesday, Dec. 15, 2015 (AP Photo)
by Daily Sabah with Agencies Dec 16, 2015 12:00 am
The U.S. has said on Wednesday that it is withdrawing a dozen warplanes from a Turkish air base, barely a month after they arrived to help Turkey protect its air space and to conduct airstrikes against Daesh targets in Syria and Iraq.

The U.S. still has 12 A-10 close-air support aircraft based at Incirlik, as well as drone aircraft.

During his visit to Incirlik, Carter said he is looking for ways to do more to hasten the defeat of the Daesh terrorists.

Carter asked for more assistance from Turkey on Tuesday to help destroy Daesh terrorists as he kicked off a tour of the Middle East that aims to drum up regional support for the military campaign.

Incirlik has grown more important in the U.S.-led campaign of air strikes against Daesh, with 59 U.S., Turkish, Qatari and German aircraft now operating out of the base, up from about 15 from all coalition countries at the beginning of September, U.S. officials said.
Last Update: Dec 16, 2015 9:42 pm
RELATED TOPICS