Sweep out operation in southeast Turkey paying off, 25 terrorists dead in 72 hours 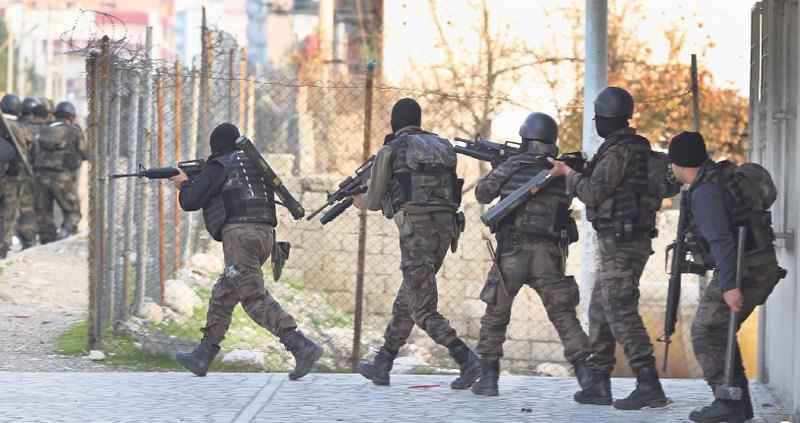 Following the comprehensive operation carried out by the security forces in several districts in southeastern provinces, experts think that the PKK is now on the ropes due to heavy casualties in the last three days

Turkish Armed Forces (TSK) and special operation units are cracking down on the PKK and its urban branch. At least 25 terrorists have been killed in the last 72 hours due to an extensive operation in the southeastern region of Turkey. Eight soldiers were also injured.

Around 10,000 security forces have been stationed in the region as part of an extensive operation to clear terrorists out of urban areas. The decision came after the PKK's urban branch made life conditions unbearable for civilians; digging ditches in the streets to trap security forces and turning cities into war zones, exposing civilians to great danger. Operations are being carried out in the districts of Silopi, Silvan, Sur and Cizre, all places where the PKK has a dominant presence. One security official, speaking on condition of anonymity, told the state-run Anadolu Agency (AA) that security forces have killed 24 PKK terrorists in the district of Cizre and another in the Silopi district of Şırnak province.

Upon the request of governorates in the region, the TSK deployed troops from the provinces of Siirt, Bolu and Sivas. Troops secured the exits of districts with heavily armored vehicles in order to not let the terrorists escape.

Tanks are also being used in the operations. Heavy explosions were heard in the streets when tanks destroyed barricades that had been set up by PKK terrorists.

Security forces are taking their time and taking safety precautions to limit civilian casualties. Failing to receive support from the public in its urban war, the PKK is reportedly exerting its last efforts after 30 years of fighting.

After the PKK decided to take violence to the streets, some locals in the region started to flee and after security forces expanded their operations, tens of thousands of people left their homes behind. Thousands of teachers were also instructed to leave their posts.

While people are forced to migrate and leave their homes behind, the terrorists try to do their best to prevent people from fleeing the war-like zone. Setting up road blocks, PKK members are reportedly opening fire on civilian vehicles as well.

On Sunday, some shopkeepers in the district of Sur protested the digging of ditches, stressing that they support the security forces. In a statement to AA, shopkeeper Mehmet Özdemir said that he has suffered a loss of around TL 300,000 ($100,000) in the last 10 days. "It is the ditches that started this environment of chaos. The shopkeepers of Sur oppose the ditches. We definitely do not want ditches," he argued.

Speaking to Daily Sabah on the issue, Vahap Coşkun, an associate professor at Dicle University, said that the extent of damage and destruction in the region is severe. "There are quite a few people that are fleeing the region," he added.

Arguing that there negotiations should be made to resolve the situation, Coşkun suggests that both sides come to the table.

When asked if the government is within its right to purge the region of terrorists before trying to solve the problem politically, Coşkun insisted on bilateral talks to provide regional security as well.

Kurtuluş Tayiz, a columnist for the Akşam daily, also spoke to Daily Sabah, expressing his full support for the operations before sitting down to restart the reconciliation process. "There is terrorist activity in these districts. The state should definitely provide security there," he said.
Underscoring that the state has been prudent so far due to the fear of civilian casualties, Tayiz asserted that if locals side with the PKK in the region, that responsibility is on them.

"Either they will surrender or die," Tayiz said, adding that there is a quite serious ongoing operation in the aforementioned districts to sweep terrorists out.

When asked about whether the operations will prove to be successful, Tayiz said: "Of course, of course they will."

Also speaking to Daily Sabah, columnist for the Yeni Şafak daily Kemal Öztürk said that the name for the operations should be given accurately. "I see it as an operation to save the people in the region from the hands of the PKK." He added that people were being held captive by the PKK. Stressing that Turkey has tried two strategies so far in the fight against the PKK, Öztürk said the third is now underway. "Turkey will now purge the region of weapons and provide security," he said, adding that the operations are very delicate.

"If the operations prove to be successful, Turkey's strategy will be included into the literature of counterterror strategies," he contended.

"There will be no negotiations till the security is provided. After that, everything will be discussed," he argued, questioning what kind of a demand the PKK might have. "The PKK is in a very tight spot," he further added.
Last Update: Dec 18, 2015 11:38 am
RELATED TOPICS