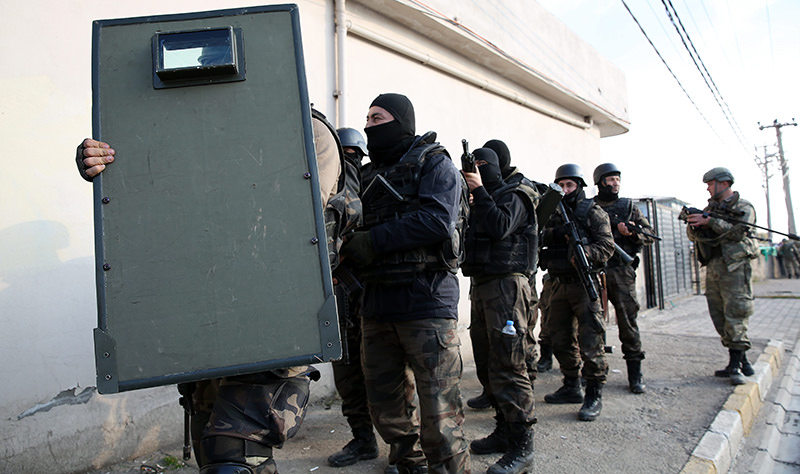 | AA Photo
by Daily Sabah Dec 18, 2015 12:00 am
Security forces have killed 55 PKK terrorists in southeastern districts of Turkey as of Friday, in major operation targeting the militants in an effort to cleanse the region of their presence and ensure public order. The figure indicated a doubling of the death toll in the last 24 hours after President Tayyip Erdoğan said on Thursday that PKK terrorists would be "annihilated." The operations followed a surge in violence by the PKK's urban wing, which has made living conditions unbearable for civilians. The terrorists have turned cities into war zones by digging ditches in the streets to prevent the movement of security forces, exposing civilians to great danger. The state-run Anadolu agency (AA) said security forces were in "hot pursuit" of militants in towns near the Syrian and Iraqi borders, which had curfews imposed on them on Monday before an operation that media has said involved 10,000 police and troops backed by tanks. Traditionally active in the countryside, the PKK has shifted its focus in recent months to towns in the southeast. Ankara has responded by cracking down with operations. Peace talks between the PKK's jailed leader, Abdullah Öcalan, and the state ground to a halt earlier this year. The PKK is designated as a terrorist group by Turkey, the United States and the European Union. The operation began on Tuesday, with 25 terrorists killed in the first two days, but the latest figure has more than doubled the number of casualties.

Meanwhile, as operations continue at full speed in Cizre, terrorists set fire to a primary school. Firefighters arrived at the scene after it was detected by drones, but were fired on to prevent them from extinguishing the blaze.

DAMAGE TO BE COMPENSATED

According to a report on the AA website, the head official of the Sur district of the province of Diyarbakır, Memduh Tura, said that damage inflicted during the operations will be compensated once the operations end.

Tura said that the process of compensation would take a month or two, but once the operations are complete, a quick examination will be carried out in the district. He added that a committee for the examination cannot currently visit damaged places due to the ongoing operation.
With the PKK taking the rural war to the streets, people in the region have been affected the most. They are afraid of stepping out of their houses and fear for their lives, and thousands fled their homes before the start of the recent extensive operation.

With over 2,000 special operations units and around 1,000 gendarmerie troops continuing the operation in Silopi, 400 PKK terrorists are reportedly trapped in the district.

According to a piece in the Yeni Şafak daily, four neighborhoods where the PKK is dominant and abundant in numbers are under siege.
Security forces have filled in most of the ditches in the district.
Last Update: Dec 18, 2015 3:22 pm
RELATED TOPICS