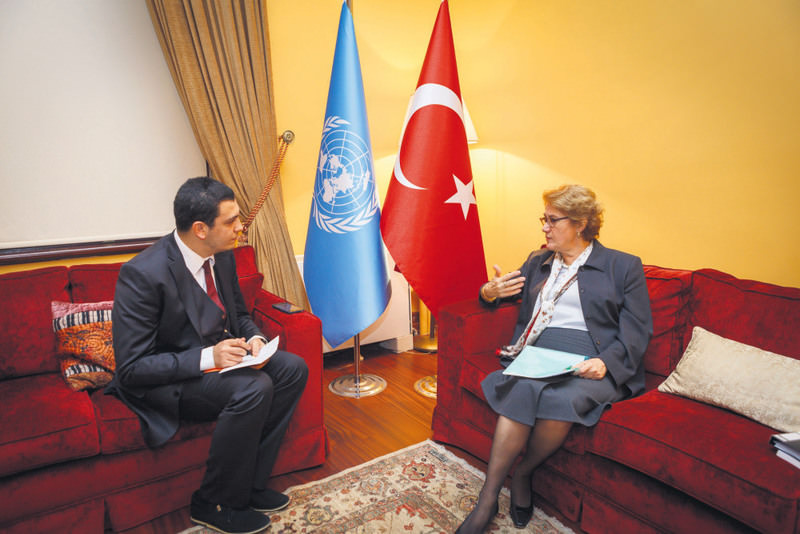 by Fatih Şemsettin Işık Dec 19, 2015 12:00 am
The 3 billion euro grant, which the EU pledged to give Ankara for it to cooperate on the Syrian refugee issue, is not enough to shoulder the burden, according to Cihan Sultanoğlu, the assistant secretary-general of the U.N. and UNDP Assistant Administrator. This issue requires broad participation among all the partners and stakeholders including governments, international community, humanitarian and development actors.

Speaking to Daily Sabah on Tuesday after the launch of the U.N. Development Programme's (UNDP) 2015 Human Development Report (HDR) at Boğaziçi University, Sultanoğlu indicated that more financial aid is required for the burden and said: "For me, the necessity is very high. When we just think it over, more is needed."

The U.N. High Commissioner for Refugees (UNHCR) announced Friday that Turkey is home to the most Syrian refugees, with 2.3 million.

Sultanoğlu said that the UNDP has an avenue of how they can work together with countries with refugee populations and how to consolidate the social fabric regarding the issue. "For this, it is necessary to work with local governance and municipalities. The capacity of municipalities must be increased. It is both related to provision of the services and responding to the refugee flow by thinking, analyzing and getting ready for it.

"Experiences show that migrants contribute both to the country they have arrived in and the one they have come from. Hence, accurate policies, the establishment of legal framework and protection of international rights and transparency is necessary," she said.

Turkey ranked 72nd out of 188 countries on the Human Development Index (HDI) in this year's HDR with a value of 0.761, putting it in the "high human development" category.

Concerning this year's report, Sultanoğlu said that Turkey has a rising trend in the rankings compared to the 1980s and it is very good to be at the brink of 0.8, which designates a country as having "very high human development."

In last year's report, Turkey ranked 69th out of 187 countries, with an HDI of 0.759. About the comparison of annual rankings, Sultanoğlu said it is difficult to make comparisons since the rankings and indices might change because of methodology or new countries joining the indexing.

Turkey has jumped 16 places over the past five years, making it the country registering the highest progress in the group with countries such as Serbia, Bosnia-Herzegovina, Albania, Macedonia, Montenegro, Azerbaijan, Armenia, Georgia and five Central Asian countries as well.

She also said improving employment and political representation of women is very significant in the country for attaining a better level on the Gender Inequality Index (GII). "14.7 percent of Parliament is women. That needs to rise to higher levels," she said.

Regarding the relocation of the UNDP's Europe and Central Asia Regional Hub to Istanbul from Bratislava in April 2015, Sultanoğlu highlighted that this decision was not taken as a coincidence but due to Turkey's being an emerging donor in the region. "Turkey's foreign aid in 2013 increased to $3.3 billion. That is very important for us because south-south cooperation is among the issues that we give importance, as the UNDP," she said, adding there is a multi-layer cooperation with the country through both the Regional Hub and other offices in Turkey as well.
RELATED TOPICS