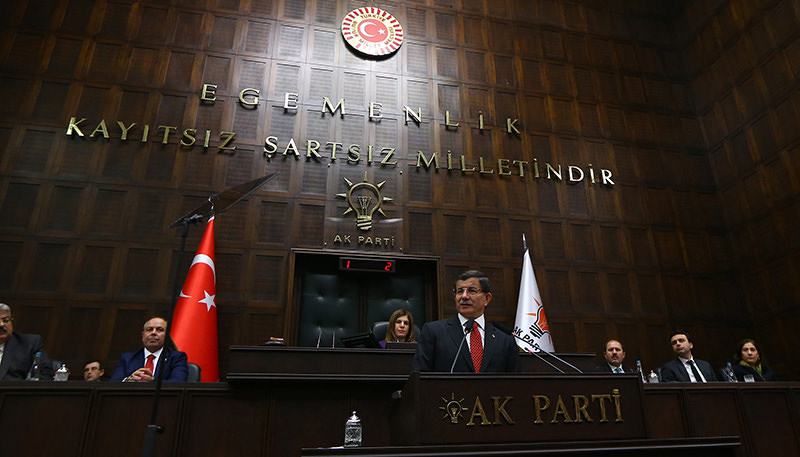 by Daily Sabah Dec 22, 2015 12:00 am
Prime Minister Ahmet Davutoğlu said on Tuesday that Turkey's military training and equipment support for Iraq will continue until Mosul is liberated from Daesh terrorists. Davutoğlu's remarks follow a statement by Defense Minister İsmet Yılmaz, who said earlier in the day that training personnel at Bashiqa Camp in Mosul will stay and continue to fight Daesh.

Speaking at Justice and Development (AK) Party's parliamentary group meeting, Davutoğlu said that Turkey is a part of the coalition against Daesh and will continue to participate in anti-terrorism operations.

He underscored that Turkey will continue to stand up against all oppressive forces, -including Russia,- which bomb civilians, instead of Daesh terrorists in Syria. He condemned the recent attack carried out by Russia in Syria's Idlib province, which killed civilians. He harshly criticized Peoples' Democratic Party (HDP) co-chair Selahattin Demirtaş for planning to visit Russia to meet Foreign Minister Sergei Lavrov.

Tensions remain high between Turkey and Russia following Turkey's shooting down of a Russian military jet last month over airspace violation. After the incident, Russia imposed a range of unilateral sanctions against Turkey, including a ban on food imports.

Davutoğlu also reiterated that Turkey's support for Palestine will not stop, amid efforts to restore relations with Israel. He said that the talks were proceeding in a positive manner.

"Whoever says Turkey is forgetting the people of Gaza and is putting aside its support for Palestine to get closer to Israel, are carrying out a defamation campaign" Davutoğlu said and added "Let alone forgetting about Gaza in negotiations, we do not even forget about it in our dreams at night: we will not forget Gaza, Palestine, Jerusalem."