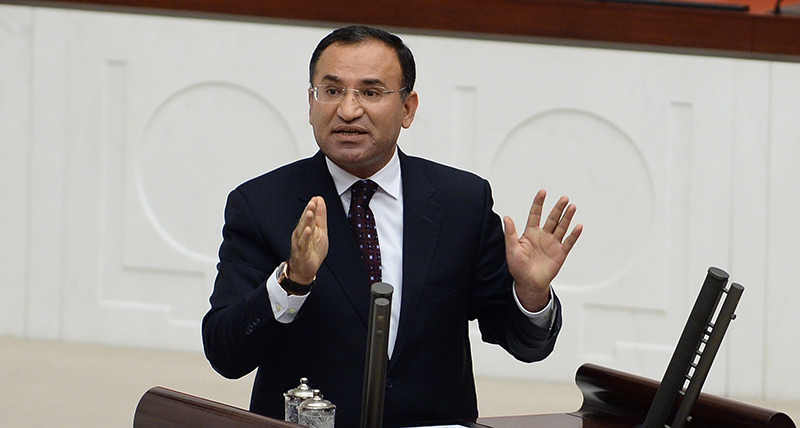 | AA Photo
by Daily Sabah Dec 23, 2015 12:00 am
Justice Minister Bekir Bozdağ on Wednesday called on Fethullah Gülen to return to Turkey to respond to allegations, rather than using a letter of request to testify in court.

Speaking to reporters, Bozdağ commented on the extradition of Gülen, the leader of the Gülen Movement who is in self-imposed exiled in the U.S. "Court decisions on Fethullah Gülen have reached our ministry, and we will soon convey them to Interpol for a Red Notice," Bozdağ said, and added that the process is still ongoing. He said that it would be better if Gülen comes to Turkey to give testimony and respond to the allegations directed at him.

Gülen did not show up in court on Tuesday for the first hearing of a trial in which he is accused of plotting to imprison his critics, despite his repeated claims of innocence.

He is the prime suspect in the Tahşiye indictment, which asks that Gülen and Samanyolu Media Group CEO Hidayet Karaca serve prison terms on terror charges that carry multiple life sentences. They are also charged with forgery of official documents and defamation stemming from allegedly planting false evidence to implicate Tahşiye members and using media propaganda against the Tahşiye group.

Recently, a Pennsylvania court received legal complaints that Gülen allegedly violated human rights by ordering his followers in the police to conduct unlawful arrests, fabricate evidence and instruct members of the group to recruit students for his movement and bring them to the U.S.
The suit asks the court to rule for "compensatory damages in an amount to be determined at trial, [plus] interest, costs, attorney's fees and punitive damages." Accusations against Gülen and his network include six counts of false accusations, detention, false imprisonment and civil conspiracy in Turkey. The claims are brought under the U.S. Alien Tort Statute that allows foreign citizens to seek remedies in U.S. courts for human rights violations committed outside the U.S.

The Gülen Movement is accused of establishing or managing a terrorist organization, exposing confidential state information for political or military espionage purposes, attempting to overthrow or obstruct the function of the government of the Republic of Turkey, violating the confidentiality of private life, unlawful recording of personal information, forgery of official documents, fabricating crimes and destroying evidence.