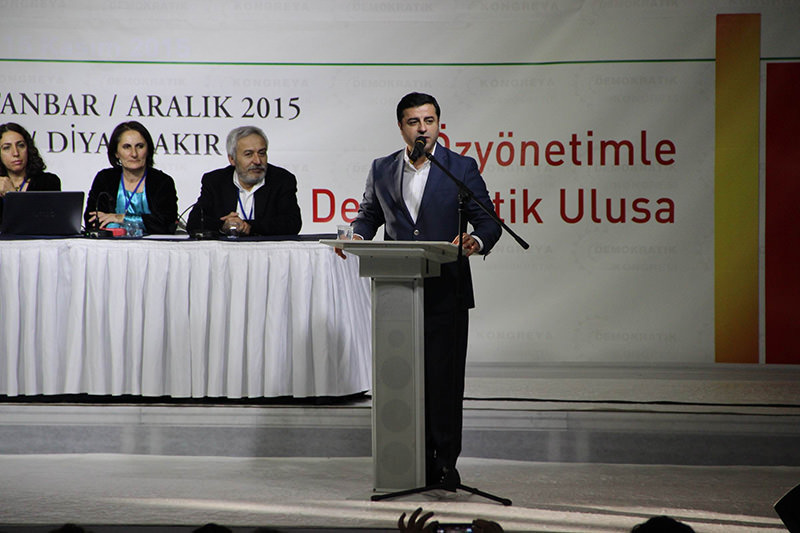 by Daily Sabah with AA
Dec 28, 2015 12:00 am
The Ankara Public Prosecutor's Office launched on Monday an investigation into the Peoples' Democratic Party (HDP) co-chair Demirtaş over 'autonomy' comments.

Demirtaş, speaking to an umbrella group called the Democratic Society Congress (DTK) in the southeastern province of Diyarbakır on Sunday, said that his party would support calls for regional autonomy in the southeast.

On Sunday, the Democratic Society Congress adapted a 14-article declaration, emphasizing the necessity of creation of autonomous regions in Turkey, mainly inhabited by Kurds.

Demirtaş announced his support for the declaration saying, "Hopefully, our addresses will once again read and listen to this declaration calmly, and see that in fact regional autonomy offers a very important opportunity for everyone in terms of living together."

Earlier this week, Diyarbakır's chief public prosecutor launched a legal probe into similar remarks made earlier by the HDP leader.

"I will never talk with anyone who brings Turkey's unity and integrity to the table," Davutoğlu said, speaking just before flying to Belgrade for an official visit to Serbia.

Davutoğlu said that he will meet with everyone to establish Turkey's future peacefully except those who are against the country's unity.

The premier also said that HDP voters should be aware that it is not "a truthful political party," claiming that its "disguised intentions" have been revealed.

Reacting to this call, CHP Vice Chairman Mehmet Bekaroğlu said on Monday that his party does not approve of Demirtaş's statements, finding them odd. "It is very important that HDP is represented in the parliament. For the solution of the problem, HDP and Demirtaş need to support the parliament base, peaceful ways, and democratic methods", Bekaroğlu said.

In an exclusive interview with Anadolu Agency Monday, Büyükataman said: "The political representatives of the terrorist organization [HDP] are being impudent".

He claimed that the recent situation showed that the HDP could never be "Turkey's party", a title which the party declared as its motto and vision during the last two parliamentary elections.

"They can neither understand being Turkey's party nor living brotherly together with our 78 million citizens nor the sensitivity of the nation on the country's indivisible integrity," he said.

He alleged that HDP officials had become so reckless that they now question the unitary structure of the Turkish state and the description of a Turkish citizenship, adding they were being careless in talking about "democratic autonomy".

He also expressed his party's support for future legal steps by the government to eradicate terror.

"As MHP, we will support if there will be a sincere legal regulation," he said.

MHP Group Acting Chairman Oktay Vural told a press conference at the parliament that HDP had dared to change the state's unitary structure with its 14-item communique.

"They obviously declared [their bid for] Kurdistan, a separate state and division. We will never allow a shanty to be built within the Republic of Turkey," Vural said.

"Our nation will also react to the dreamers of Kurdistan under the name of self-governance, autonomy and initiative," he added.
Last Update: Dec 28, 2015 5:56 pm