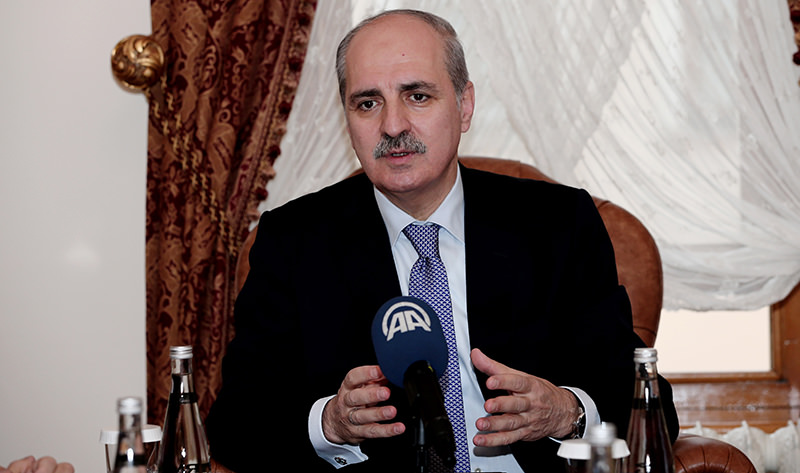 | AA Photo
by Nurbanu Kızıl Jan 07, 2016 12:00 am
Deputy Prime Minister Numan Kurtulmuş underscored the necessity of a strong executive branch in Turkey, as well as the importance of checks and balances to provide a more effective political system and improved democracy for citizens.

Speaking at a televised interview on NTV channel, Kurtulmuş said that the election of president by popular vote was a significant step which contributed to the executive, but the current constitution does not allow the will of the people to dominate in all state institutions and organizations.

"We need an effective executive, which makes fast and important decisions, but is checked at the same time," Kurtulmuş said, and noted that the current system does not allow parties with majorities in parliament to be checked, whereas a presidential system inspects all steps taken by the president and his/her team.

Kurtulmuş also noted that Article 104 of the Constitution gives 'irresponsible' authority to the presidency, which has the sole grip over power. He continued by saying that the president does not have solid responsibilities, but is able to practice tremendous power over numerous affairs including the appointment of a significant part of the judiciary, the Board of Higher Education (YÖK), and more.

"Let us establish a mechanism which is effective with well-constructed control mechanisms, and a mechanism that can provide checks and balances," Kurtulmuş said, and added that the best way to establish such a mechanism is through the presidential system.

With regards to the tensions between Saudi Arabia and Iran over the execution of a Shiite cleric, Kurtulmuş said that Turkey's stance is clear and that it does not want new crises in the region.

The entire world of Turkish politics has been caught up in the debate about whether the country needs a presidential system to replace the current parliamentary government, a move strongly backed by the Justice and Development (AK) Party government and President Erdoğan, but opposed by opposition parties.
The AK Party does not have enough seats in Parliament to vote for a constitutional change such as the introduction of a presidential system without opposition.

A constitutional amendment or a new constitution would be needed to set up a presidential system. The country's current Constitution was drafted two years after a military takeover in 1980 and numerous amendments have been made to it since then. The governmental system has been a hotly debated issue throughout modern Turkey's history beginning with the eighth president, Turgut Özal, and continuing with the ninth president, Süleyman Demirel. It has been brought up again by Erdoğan, who has claimed that a presidential system is more suitable to the country's political structure.
Last Update: Jan 08, 2016 4:53 pm
RELATED TOPICS