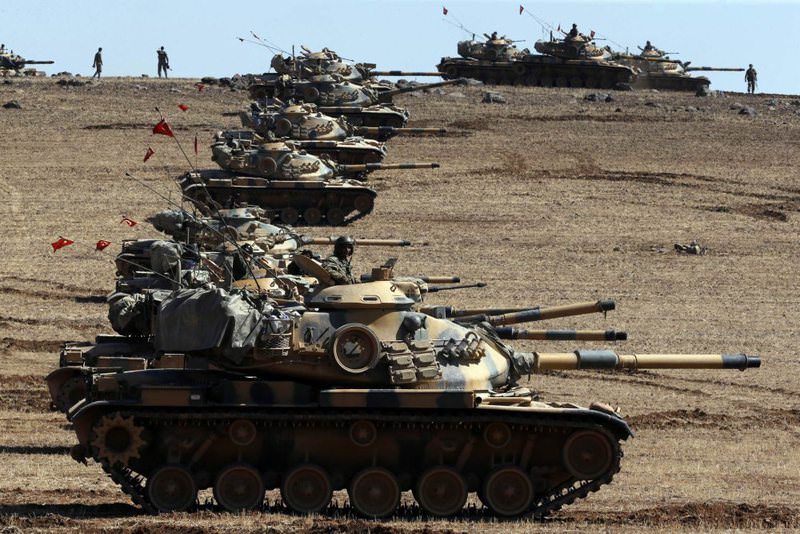 Experts interpret the recent DAESH suicide bombing in Istanbul as the terrorist organization making Turkey pay a price for the country's active role in the region, especially its support for opposition groups battling the group

A group of Syrian opposition factions in northern Syria continue operations on four DAESH-held villages to purge the terrorist organization from northern Aleppo and Jarabulus. Turkey is maintaining its support for the anti-DAESH offensives with howitzer fire.

The Ankara-supported Turkmen Liwa Sultan Murad Brigades and several other groups are currently targeting four villages, including the strategic village of Doudyan and projects to take all DAESH-held Turkmen-populated villages in the 80-kilometer line from DAESH to enter Jarabulus, where the PKK's Syrian affiliate Democratic Union Party (PYD) is in efforts to control.

Since the operations started on Jan. 9, opposition groups continue to make progress against DAESH, seizing control of four villages with 1,200 men. The opposition groups, including the Turkmen Liwa Sultan Murad Brigade, Shamiya Front and the Sham Legion, have taken the upper hand in the villages of Kara Kobri, Kharaba, Qarah Mazrah and Khuzul.

In the event the opposition takes the upper hand in Doudyan, it is expected that DAESH might have to retreat from seven other villages in the area. The largest Turkmen village in the region, Çobanbey, remains as another objective unless the progress of opposition groups is rebuffed. The village constitutes an important passing route for the Jarabulus-centered attacks. After the PYD took control of the Tishrin Dam from DAESH last week, the nearby town of Manbij has become a possible destination for opposition groups.

Despite the potential for advancement against them, opposition groups are still facing the DAESH threat in Azaz, a town 7 kilometers away from the Turkish border. It is known that the terrorist organization wants to seize the town, raising concerns about Syrian opposition groups having access to the outside world and the delivery of humanitarian aid.

Furthermore, the area between Azaz and Jarabulus is where Turkey wants to eventually establish a "safe zone" for Syrian refugees. Therefore, a likely offensive by DAESH is also a threat to Turkey's safe zone project.

Analysts say that Turkey has become a target for DAESH because of the country's effective fight against the group and its support for opposition factions that fight the terrorist organization. Turkey was hit once again on Tuesday by a suicide bombing in Sultanahmet Square in Istanbul that killed at least 10 people.

Researcher and writer Bekir Aydoğan said it is not a coincidence that DAESH has conducted terror attacks in Turkey after the country had proposed establishing a safe zone in northern Syria and spoke of liberating Mosul from the terrorist organization. "On the other hand, Turkey would hit the PYD in the event it heads to Manbij to seize Azaz or Jarabulus to cut the Aleppo line of the opposition groups. Therefore, the same danger might come from the terrorist PKK's metropolitan affiliation Kurdistan Freedom Hawks [TAK]," he said.

He added: "Although the Sultanahmet bombing was orchestrated by DAESH, it aims to prevent Turkey's proactive moves in Syria and Iraq, responding to DAESH and PKK terror outside of its borders."

Ankara's more active role in the anti-DAESH fight is also seen as a reason for the terrorist organization targeting Turkey, according to Oytun Orhan, an expert on the Middle East at the Ankara-based Center for Middle Eastern Strategic Studies (ORSAM) think tank.

Regarding Ankara supporting opposition groups' offensives in northern Syria, Orhan said that it is only a single dimension of the multi-tasked struggle of the country against DAESH.

He said: "Turkey is more active in the anti-DAESH coalition and has tightened border security measures, even building concrete walls on the border. Moreover, the growing amount of operations inside the country against DAESH structures and a compromise with the U.S. about the use of İncirlik Air Base are other dimensions of Turkey's continuing anti-DAESH efforts. Yet, in my opinion, Turkey's support to opposition groups is the most important one among the patterns," Orhan said.

He added: "It is possible to say that DAESH, with this Sultanahmet bombing, wanted to make Turkey pay a price for its efforts against itself."

Together with Turkey's active role, Sertaç Canalp Korkmaz, a researcher at Turkey's National Police Academy, also stressed the importance of the recent attack on the Bashiqa camp north of Mosul, and said: "[The] suicide attack in Sultanahmet, which was conducted by an ISIS [DAESH] member, may be evaluated as ISIS's [DAESH] revenge as a response to Turkey's actions."

Turkish soldiers deployed in the camp deterred a second DAESH attack on Thursday night, killing 18 terrorists, military sources said. Regarding the attack, the sources reported no injuries or casualties among the Turkish soldiers.
RELATED TOPICS