No tolerance for Daesh presence in Turkey or region, Erdoğan says at attack site 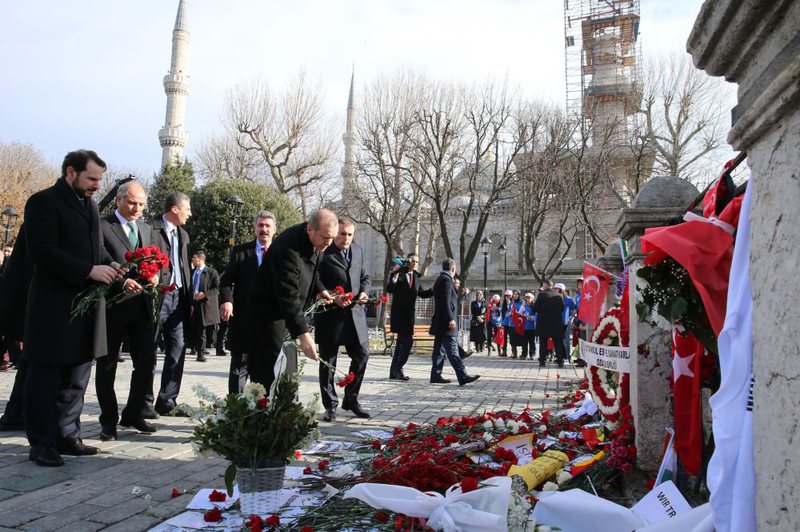 Turkey will not allow the Daesh terrorist organization to take root in the country and the counterterrorism fight will continue against all terrorist groups, President Recep Tayyip Erdoğan said on Friday after Friday prayers at Sultanahmet Square, the scene where the deadly Daesh suicide bombing on Jan. 12 took place. "There have been 10 acts by Daesh against Turkey so far. Our fight against all terrorist organizations, especially the PKK and DAESH, will continue ferociously," Erdoğan told reporters. He said the attack on Tuesday was under a multi-faceted investigation and responses were determined in a security meeting held Friday in the Presidential Palace.

"The presence of Daesh in Turkey is not acceptable," he added. The president also said that he expressed his condolences to German Chancellor Angela Merkel for the 10 German citizens killed in the attack, and thanked her for her sympathy for Turkey's suffering. Erdoğan attended Friday prayers at Sultan Ahmet Mosque led by Presidency of Religious Affairs (DİB) head Mehmet Görmez. Accompanied by Interior Minister Efkan Ala, Erdoğan also visited the scene of the attack and left carnations in respect for the victims.

A Daesh suicide bomber detonated a powerful bomb amid a group of elderly German tourists in Istanbul's Sultan Ahmet Square early Tuesday, killing 10 and injuring 15. Erdoğan said that the perpetrator is a Syrian suicide bomber, while Turkish Prime Minister Ahmet Davutoğlu told reporters on Wednesday that the police had identified the suicide bomber as a Syrian national who claimed refugee status in Turkey.

Davutoğlu said that the bomber had Daesh links, adding: "Police were not in pursuit of the bomber. He had come to Turkey as an ordinary refugee. However, after the attack, all his contacts were brought out."

Within the scope of the ongoing investigations, police have detained a total of seven suspects in connection with Tuesday's Istanbul suicide bomb attack, Ala said on Thursday.

Turkey has retaliated by carrying out operations against Daesh targets in Iraq and Syria shortly after the military confirmed that the attack was carried out by the terrorist organization. Davutoğlu noted on Thursday that around 500 artillery rounds were fired at Daesh positions in the 48 hours following the attack, killing 200 terrorists in total, including so-called regional chiefs.

Analysts interpret the suicide bombing in Istanbul as Daesh making Turkey pay a price for the country's active role in Syria, especially its support for opposition groups battling Daesh in northern Syria.

The Ankara-supported Liwa Sultan Murad Brigades, a Turkmen fighting group, along with several other groups are currently conducting an operation to take all DAESH-held Turkmen-populated villages in an 80-kilometer line around Jarabulus, where the PKK's Syrian affiliate Democratic Union Party (PYD) has made efforts to control. Turkey is maintaining its support for the anti-Daesh offensives with howitzer fire.

Since the operations started on Jan. 9, opposition groups have continued to make progress against DAESH, seizing control of four villages with 1,200 men. The opposition groups, including the Turkmen Liwa Sultan Murad Brigade, Shamiya Front and the Sham Legion, have taken the upper hand in several villages in the area.

Furthermore, the country continues its efforts to cut the roots of any Daesh presence in Turkey by intensifying investigations and operations against terrorists. Speaking at a program for Administrators' Day in Istanbul on Monday, Ala said: "We sometimes announce figures in the fight against DAESH. We have put entrance bans on 35,970 people from 124 countries. This is due to intelligence sharing. However we say when communicating with a country's interior or foreign affairs ministry, that we have almost 3 million [refugees] and Turkey is along the migration route. We warn them to do their homework as well."

For all these reasons, Turkey which is also struggling with PKK terrorism, remains a target for DAESH. The terrorist organization seeks to cut the ties with opposition groups in Syria by threating Azaz, a town 7 kilometers from the Turkish border. It is known that the terrorist organization wants to seize the town, raising concerns about Syrian opposition groups having access to the outside world and the delivery of humanitarian aid.

Furthermore, the area between Azaz and Jarabulus is where Turkey wants to eventually establish a "safe zone" for Syrian refugees. Therefore, a likely offensive by Daesh is also a threat to Turkey's safe zone proposal.
RELATED TOPICS