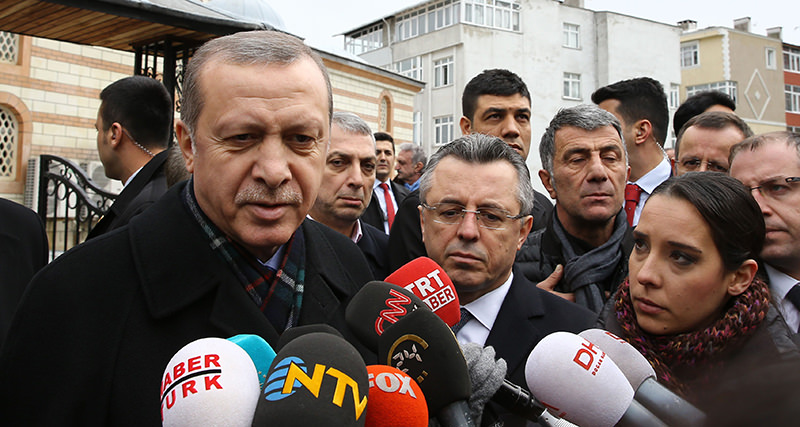 by Daily Sabah Jan 22, 2016 12:00 am
President Recep Tayyip Erdoğan said on Friday that Turkey will not allow Russia to build a base in northern Syria.

President Erdoğan was asked by reporters after the Friday prayer of what he thinks about claims that Russia will build a base in Northern Syria.

Erdoğan said that Turkey is aware that there are around 100 Russian soldiers deployed in northern Syria.

"There is no difference between them. We will also talk with Mr. Biden about this issue in detail tomorrow," Erdoğan said.

He also emphasized that Qatar, Germany, France and the U.K. were part of the issue.

"We will not allow such a thing in northern Syria," he said.

Erdoğan also touched upon the PKK's terror attack on an elementary school which happened on early Friday in Turkey's southeastern Diyarbakır province.

He said that the terror attack on the school showed the vicious plans of the terror organization.

Erdoğan said that the attack was also a response to the 1,128 academics who signed a petition that described security operations against the PKK in the country's southeast as a "massacre."

"They [the academics] say 'This is who we are. We don't have a problem with this issue. We are with terror'," Erdoğan said.

"Our only consolation is that none of our children died during the attack," he concluded.
Last Update: Jan 22, 2016 10:54 pm
RELATED TOPICS