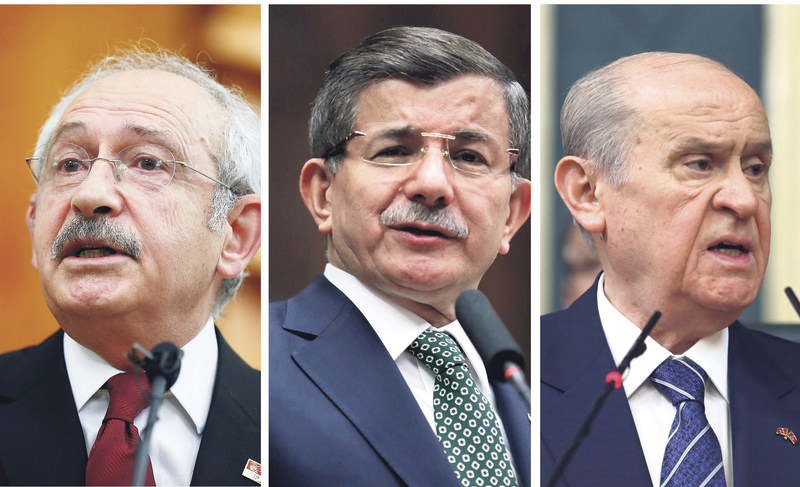 Even though there is contention that the HDP cannot distance itself from the PKK terrorist organization and call on it to act like a political party, HDP Deputy Hezer on Sunday added fuel to the fire when she attended the condolence ceremony of the Ankara suicide bomber that claimed 29 lives

"Attending the condolence ceremony held for a suicide bomber that caused bloodshed and remembering him with respect is the biggest betrayal against humanity," Prime Minister Ahmet Davutoğlu said in his address. CHP Chairman Kemal Kılıçdaroğlu, whose party has been in close contact with the HDP, especially since the June 7 elections, also condemned Hezer's decision to attend the funeral. "All political parties should strike a loud and clear attitude against terror. Attending the condolence ceremony of a terrorist is not appropriate and is treason. We condemn it and do not approve of it," Kılıçdaroğlu said.

MHP Chairman Devlet Bahçeli voiced his dissatisfaction with people setting up a condolence ceremony for a terrorist. "The presence of the rotten [people] who embrace murderers while our nation mourns its dead is the most obvious indication of what we've become," Bahçeli contended.

A TERRORIST'S PATH TO SUICIDE ATTACK

- Returned to Turkey as a refugee,
registering as Saleh Nejar

- Officials identified the bomber as
Nejar from his fingerprints

- Further inquiry showed him to be
Sömer using an alias

On Sunday, Hezer visited the condolence home in Van province, where she is a deputy, and offered her condolences to the family of the PKK splinter group Kurdistan Freedom Hawks (TAK) terrorist named Abdülbaki Sönmez, also known as "Zınar Reperin," the alleged perpetrator of the Ankara bombing, although sources from the prosecutor's office investigating the attack deny his connection, saying it is misleading efforts to prevent blaming the Democratic Union Party's (PYD) Peoples' Protection Units (YPG).

Davutoğlu also rejected the TAK's claim of responsibility and said the link between the PKK and the PYD and its YPG was detected in the Ankara bombing and the perpetrator, who was claimed to be a Syrian national, was identified as Salih Nejar from fingerprints taken when he entered the country.

The HDP has often been criticized for its alleged failure to distance itself from the PKK terrorist organization. HDP deputies also added fuel to the debate with seemingly controversial remarks. HDP Co-Chair Figen Yüksekdağ said in July that her party supported the PYD and its YPG, the Syrian affiliate of the PKK. "We lean on the YPJ [Women's Protection Units], YPG and PYD and we do not see any harm in supporting them," she said.
Another HDP deputy, Abdullah Zeydan, also said in late July that the PKK has the power to "drown Turkey with its spit."

In addition, other HDP officials have been accused of aiding and abetting the PKK terrorist organization. The pro-Kurdish did not condemn the PKK's decision to take the war into urban areas, either. HDP Co-Chair Selahattin Demirtaş made remarks regarding PKK urban terrorists who had stoked the flames of a new conflict and caused hundreds of thousands of people to flee, calling them "a few youngsters with arms in their hands."

Underscoring that he is fully in favor of the voicing of even the most extreme and opposing ideas, Genç suggested that the current situation cannot be explained with democracy. "Such people shall not do politics. They shall be punished legally," he added.

When asked about the common stance of the three political parties on the issue, Genç said it is important to see solidarity among political parties in Parliament. Commenting on Kılıçdaroğlu's statement, who has for some failed to strike an attitude of national conciliation before, Genç said he had no option but to condemn Hezer.

"We cannot say the CHP passed its test in terms of its stance against terror, yet it would have been suicide if Kılıçdaroğlu had not condemned it. If he had not condemned it, [former CHP Chairman Deniz] Baykal's criticism would have proven right," Genç said, adding that one cannot say that the CHP did not turn into a "HDP-like party."
Last Update: Feb 23, 2016 11:52 pm
RELATED TOPICS