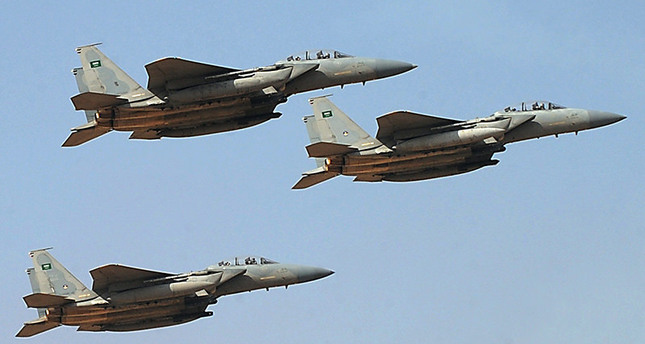 by Daily Sabah Feb 25, 2016 12:00 am
Four Saudi F-15 fighter jets are expected to arrive at Turkey's İncirlik airbase on Friday in the fight against Daesh, according to various reports.

A group of 30 advance guard Saudi Arabia troops had already arrived in the airbase along with C-130 Hercules multipurpose military transport aircraft. The Doğan news agency cited army sources as saying that C-130 cargo planes had been shipping military materials to İncirlik for the last two days.

Turkish officials previously announced that Saudi Arabia would send fighter jets to the İncirlik airbase as part of the U.S.-led coalition forces' operations, but did not say how many planes would come.

This is the first time a non-NATO country deployed military forces to İncirlik since the base entered into service in 1955.

Saudi Arabia has also said early in February that it was ready to join any ground operation against Daesh.

Saudi Arabia and Turkey both staunchly support opposition forces seeking to oust Bashar Assad and see his overthrow as essential for ending Syria's five-year civil war that has cost more than 260,000 lives.

Both are outraged by Russia's military intervention in Syria, which analysts believe has given Assad a new lease on life and has also alarmed the West.