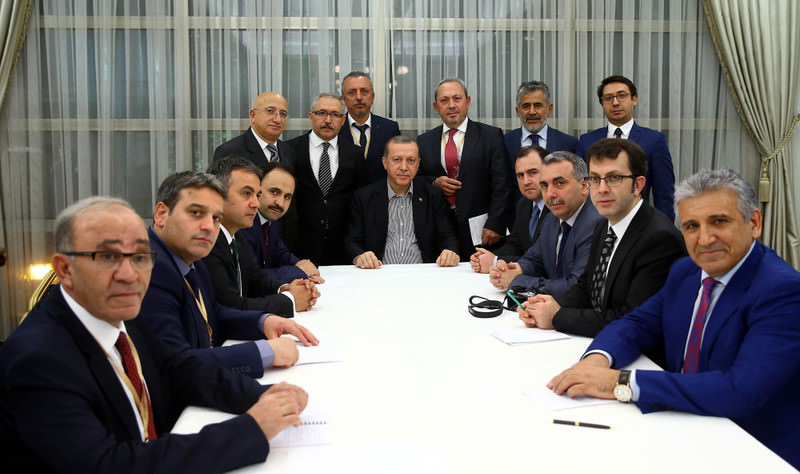 Speaking to journalists accompanying him during his West Africa tour, President Erdoğan said the case concerning disclosure of a state secret is not freedom of expression but an espionage attempt, referring to the Constitutional Court's decision to release Cumhuriyet's editors

President Recep Tayyip Erdoğan, speaking to journalists in the Nigerian capital of Abuja on the last day of his tour of West Africa, said the case concerning the disclosure of top secret information on various measures taken by the National Intelligence Organization (MİT) to help the Bayırbucak Turkmens in north Syria was exclusively a matter of espionage.

"This is no ordinary case. We are talking about a case of espionage. Those who attempted it, whether they were prosecutors or military officers, are currently in jail. They have been dismissed from their duties," said Erdoğan, asking how measures taken concerning the case could now be considered a violation of freedom of expression. Erdoğan was referring to the decision by the Constitutional Court to release Cumhuriyet daily's Editor-in-Chief Can Dündar and Ankara representative Erdem Gül, who both face charges of acquiring and publishing top state secrets, releasing information of importance for the country's security and espionage. While the two were imprisoned pending their trial on espionage, the Constitutional Court last week decided their continued incarceration was a violation of the Constitution. Both suspects were released pending their trial.

"Do members of the media have the freedom to do anything they want?" asked Erdoğan, arguing that the case involved divulging crucial MİT secrets, manipulating facts and an attempt to portray Turkey as a country that aided DAESH. He also wondered how measures taken against such acts could be seen as a violation of freedom of the press, adding, "If you use the concept of releasing suspects during trials for cases involving those who divulge the country's security secrets, the cost will be incredibly high."He also referred to previous statements by Constitutional Court Chief Judge Zühtü Arslan, who had advised courts to wait to announce their decisions until after they could release the argument their decision was based on, claiming that the speedy release of decision had contradicted Arslan's former stance. He also criticized the court for intervening in a continuing judicial process.

Erdoğan said he respected Arslan, but the decision of the court was a bad day for Turkey's judiciary. "He also said that the decisions taken by the Constitutional Court superseded all and were binding to all. He is correct, with respect to the Constitutional and legislative amendments. But no such thing is exists concerning individual applications."

He said the Constitutional Court had sent its decision to the lower court that ordered Can and Gül's arrest. "If the decision in binding, there is no need to send it to the lower court, which has the right to object. If it does, the Constitutional Court cannot do anything. Suspects may take the matter to the European Court of Human Rights, which may find in favor of the suspects. And the European Court's decision is binding in terms of compensation. Then the state will either object or pay compensation."

On the matter of Parliament's efforts to prepare a new constitution, Erdoğan said the opposition Republican People's Party's (CHP) withdrawal from the process was unfortunate. "No one has the obligation to agree to anything. However, everything should be discussed," he said and then referred to past objections by opposition parties that prevented the government from ensuring no political party would be shut down.

When asked about possible opposition obstruction to prevent a draft charter prepared by the government from getting parliamentary approval, Erdoğan said, "If that happens, the public will see that the government had done what it could while the opposition, contrary to its elections pledges, did everything possible to prevent a new constitution."

On the diplomatic front, Erdoğan said the reported thaw with Israel was still an ongoing process, which, once complete, would result in the appointment of ambassadors. While Israel apologized for the raid on the Mavi Marmara flotilla that was carrying aid to the Gaza Strip and an agreement on compensation for the victims of the raid and their families was close to completion, the most important prerequisite for a diplomatic thaw, the lifting of the blockade on the Gaza Strip, is still in negotiations. He said the priority should be to alleviate the huge energy deficit in Gaza, which could be addressed through linking it to an energy ship or building a natural gas power plant. "We, as Turkey, can help in that regard. There is also a water problem that could be addressed with a desalination plant. There are also hospital and school problems. We are receiving positive signals on all discussions. We are waiting for encouraging steps on these matters. Once these are done, the rest will follow."

On the matter of the U.S. administration's continued refusal to see that the PKK, which the U.S. recognizes as a terrorist group, and its Syrian affiliate the Democratic Union Party (PYD) are one and the same, Erdoğan said recent discussions between Foreign Minister Mevlüt Çavuşoğlu and U.S. Secretary of State John Kerry had given Turkish officials the impression that the U.S. was changing its stance on the PYD. Erdoğan said he would be discussing the matter with U.S. President Barack Obama during his visit to Washington later this month. "Of course, the state of our region is very serious. We will discuss how we can push the region toward a positive direction by doing everything in our power. Prime Minister [Ahmet Davutoğlu] will be visiting Iran. That is a very important trip. I hope he will return with encouraging news," he said.

When asked about the cease-fire in Syria, Erdoğan dismissed it. "Deaths continue to multiply. The death toll will soon reach 500,000," he said, adding that the Russian decision to boost its military presence and support for the Assad regime showed it agreed with its objectives.

He also said there were serious questions over Europe's sincerity in addressing the refugee crisis. "They pledged to give 3 billion euros to Turkey. They have sent nothing yet. The 10 billion euros we cite as expenses only includes expenses by the state. It doesn't include the money spent by NGOs, municipalities or individuals. Just imagine, there are between 400,000 and 500,000 refugees in Istanbul alone. There are 130,000 refugees in Kilis, where locals number 98,000. Outside help totals about $450 million to 460 million."

Erdoğan also summarized his visit to West Africa, which included Ghana, Cote d'Ivoire, Nigeria and Guinea, sharing his hope that the bilateral agreements signed would result in increased commercial and diplomatic ties.

He said the Turkish businessmen who accompanied him wanted Eximbank to facilitate increased trade and investment ties to the region. "Despite the campaign by the Gülen Movement in the region, our businessmen and agencies are determined to do great things here," he said.

Concerning the last leg of the trip in Guinea, he said it had many requests from Turkey. "We will send the Istanbul Metropolitan Municipality's old public buses to the region. We will also train locals on how to maintain and repair them. We also suggested they study the Metrobus system of Istanbul.

He said he also proposed to top officials to hire Turkish firms to build an oil and gas refinery in Nigeria to increase their profits. There were also possible incentives to cooperate in the defense industry, he said.

Erdoğan said Turkey's economy will continue to grow above 4 percent, citing a recent Moody's report, but admitted that there were problems, such as the shrinking foreign exchange reserve. "The government needs to take action to increase it back up to $130 billion, where it was when I left the post of prime minister."

He also criticized the high interest rates, which he said was a huge obstacle to increased investment: "Investments need to continue no matter what. If there is investment, there is employment, production, competition and growth."

He also remarked on UEFA's decision to ban Galatasaray from participating in next year's European club championships for financial improprieties, arguing that individuals suspected of criminal activities, not clubs, should be punished. "Club presidents or officials responsible should be punished, not clubs. Once you punish a club, you punish its 20 or 25 million supporters as well. The ban on Fenerbahçe was the same. This mentality is faulty. I hope suggestions will be taken into account and individuals, not clubs, will be punished in the future," he said.
RELATED TOPICS