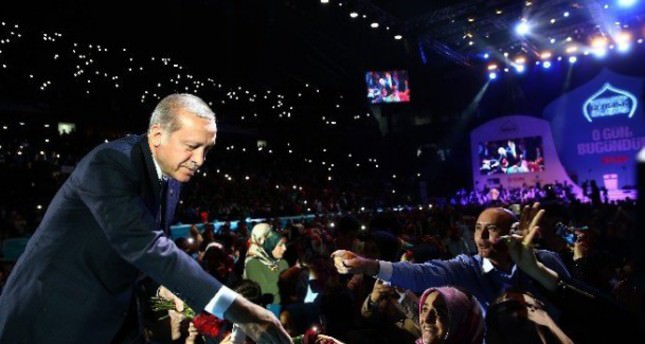 President Recep Tayyip Erdoğan Thursday asserted that Turkey is now the only hope for the Muslim world as the current global order cracks. "The order dominant in the world is cracking. Crises are the signals of a new wave of changes. Turkey is now the hope of the Muslim world," Erdoğan said. Explaining that the Muslim world has three main problems right now, Erdoğan said sectarianism, racism and terrorism trouble Muslims. "One of them is sectarianism. We have a religion that is above sects. We recognize nothing other than Islam. The second instigation is racism. We should not be racist if we have faith. The third instigation is terrorism. The PKK, the PYD [Democratic Union Party], DAESH … [t]hese are all terror organizations that feed from the same instigation. They have no relation to Islam," he said.

He also addressed the Muslim world at the Organization of Islamic Countries (OIC) Islamic Summit Conference held in mid-April in Istanbul. Regarding sectarian conflicts in the region, Erdoğan said they are provocations that Muslims should avoid: "We are not Shiite or Sunni or something else. We have only one religion."

He also condemned DAESH's expansion in the region and said Islam is a religion of peace. "DAESH develops its attacks continuously in the region and they lead to destruction with the claim of doing it in the name of Islam. They have nothing to do with Islam," he said, adding that Turkey has been fighting the PKK and other terrorist organizations for the past 35 years.

The rotating presidency at the OIC will be now in Turkey's hands for the next two years. As the president of the organization, Erdoğan is expected to address the problems in the Muslim world. "I believe that with the Istanbul summit we are conveying a message of justice and peace not only to Muslims, but to the entire world," Erdoğan said in his closing remarks at the conference, highlighting the importance of cooperation between OIC member states.

Share on Facebook Share on Twitter
Previous in Politics With rising Islamophobia throughout the West, especially in the European... Next in Politics Both Turks and Armenians are against the West intervening in a solution...
DAILY SABAH RECOMMENDS