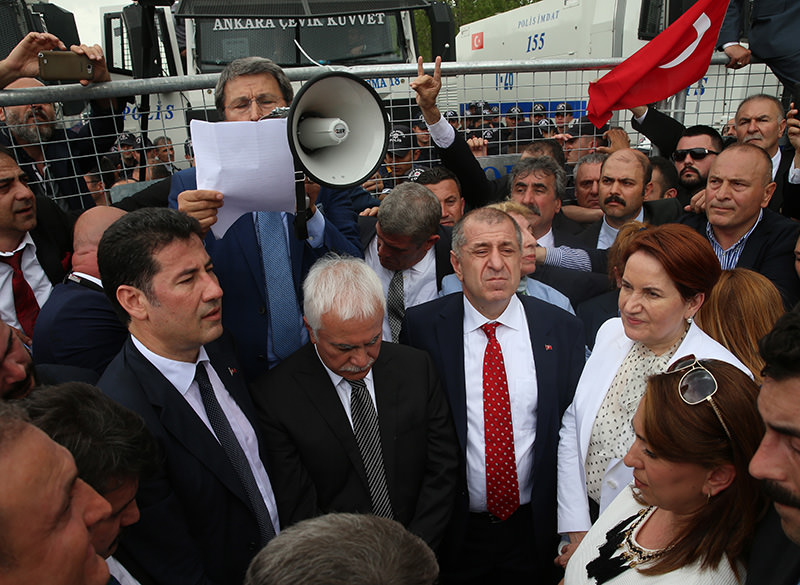 Bahçeli, who has led the party for 19 years, said in January that the next party congress would take place in 2018, meaning he would be in charge until then.

Police have prevented dissident members of the MHP from holding a controversial emergency convention at the Büyük Anadolu Hotel in the capital Ankara.

The entrance of the hotel, was closed off by police barricades in line reportedly with instructions from the Ankara Governorate.

Hundreds of party members, who were not allowed to enter the hotel, stood in front of a training center belonging to Ministry of Customs and Trade and chanted slogans against the MHP's head office.

MHP dissidents have been very local after the Nov. 1 elections, in which the party barely passed the 10 percent national election threshold and lost half of its deputies compared to the June 7 elections. Since then, Meral Akşener, Sinan Oğan and Koray Aydın have raised their voices against MHP Chairman Devlet Bahçeli, who has ruled the party since 1997. Later, the dissidents were joined by vice chairman Ümit Özdağ.

On May 13, a Turkish court accepted MHP dissidents' appeal against the stay of execution of another court on party's emergency convention.

Bolstering the position of the party leadership, the Ankara Governorship said in a statement that under the court rulings received by the office, no MHP convention will be allowed.

Bahçeli took control of the MHP in 1997, seeking to turn it into a mainstream political movement.