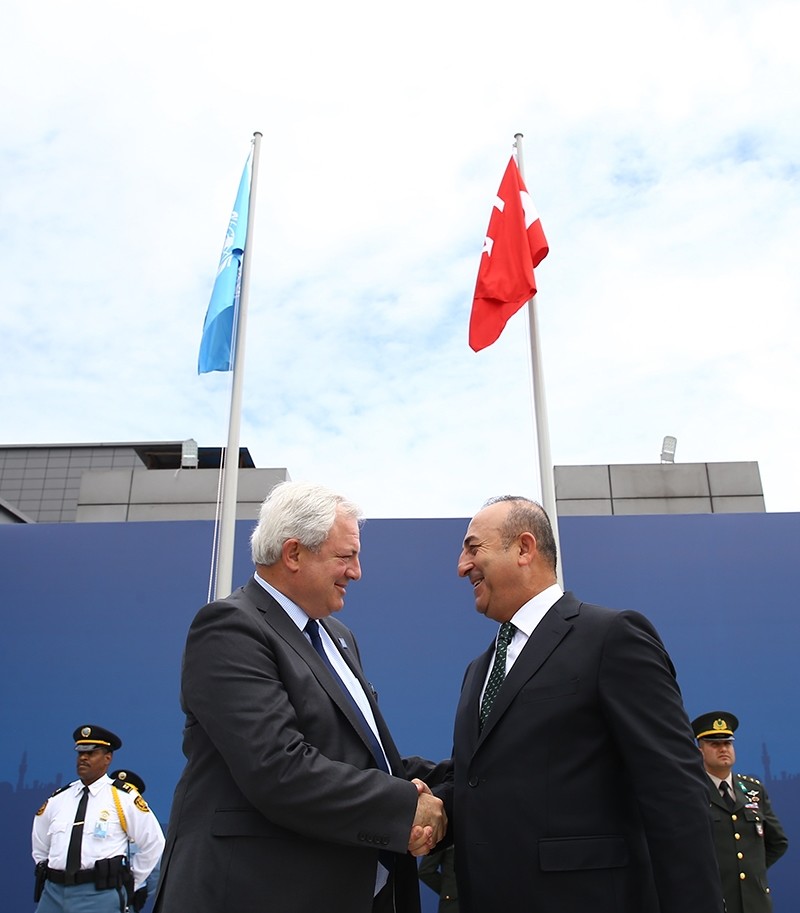 FM u00c7avuu015fou011flu and the United Nations' Under-Secretary-General for Humanitarian Affairs and Emergency Relief Coordinator Stephen O'Brien at the flag-hoisting ceremony on May 21, 2015. ( AA Photo)
by Anadolu Agency May 21, 2016 12:00 am

Foreign Minister Mevlüt Çavuşoğlu has said that the world has so far failed to deliver an effective response to humanitarian crises.

Speaking at a flag-hoisting ceremony in Istanbul ahead of the upcoming first-ever World Humanitarian Summit to take place in the Turkish province, Çavuşoğlu said that both countries and international organizations have either been desperate in their attempts to solve the problems of people suffering from conflicts, violence, terror, natural disasters or economic crises, or "they failed with classic methods."

Noting that Turkey was honored to host the world's first humanitarian summit, Çavuşoğlu said even the most developed countries were not immune to this suffering.

"That's why UN Secretary General Ban Ki-moon came up with this idea for a summit in order to find new solutions for the problems facing humanity," he said.

"At the Summit starting Monday under the co-chairmanship of President Recep Tayyip Erdoğan and Ban, leaders and representatives from nearly 180 countries, representing international organizations, academia, faith groups and non-governmental organizations will be sharing their opinions and experiences in order to find out how to better serve humanity," he added.

Çavuşoğlu went on to say that humanitarian diplomacy and aid were, and would remain, one of Turkey's priorities.

"In terms of humanitarian aid, we are number three in the world right after the United States and the United Kingdom. However, we are number one when you consider the aid delivered in relation to national income," he said.

Turkey ranked third in the list of countries with the most international humanitarian work in 2012 and 2013, the Turkish Cooperation and Coordination Agency, TIKA, said in its Turkish Development Assistance 2013 report-the latest such figures from the agency.

According to another 2013 Global Humanitarian Assistance report, the top five donor countries in terms of humanitarian assistance were the U.S. with $3.8 billion, followed by EU institutions ($1.9 billion), the U.K. ($1.2 billion), Turkey ($1 billion) and Sweden with $784 million.

Hosting almost 3 million Syrian refugees, Turkey has spent nearly $10 billion on caring for them since the beginning of the Syrian crisis.

"My huge thanks to Mevlüt Çavuşoğlu, for his generosity and the Turkish people and government for hosting this historical summit here in Istanbul, and for giving us this opportunity to bring about meaningful change in the lives of millions of people around the world," he said.

"When UN secretary general called for a world humanitarian summit four years ago, he did so recognizing that we can no longer accept the status quo when it comes to the extent and scale of global humanitarian suffering," he continued.

"Fours years later here we are following global consultations with over 33,000 people around the world.

"They will all gather here to commit to put vulnerable people at the heart of our collective decision-making", he said.

"So we have two days to show the world what we are capable of, what we can live up to, and how we live up to our responsibilities as leaders to commit to a world where every human life is equally valid and protected," he added.

"Let's make this summit a defining moment in our global determination and decision-making by making history happen here in Istanbul," he concluded.

During the summit, attended by 125 of the UN's 193 member states, at least 50 heads of government are expected to announce several commitments to reduce humanitarian disasters.