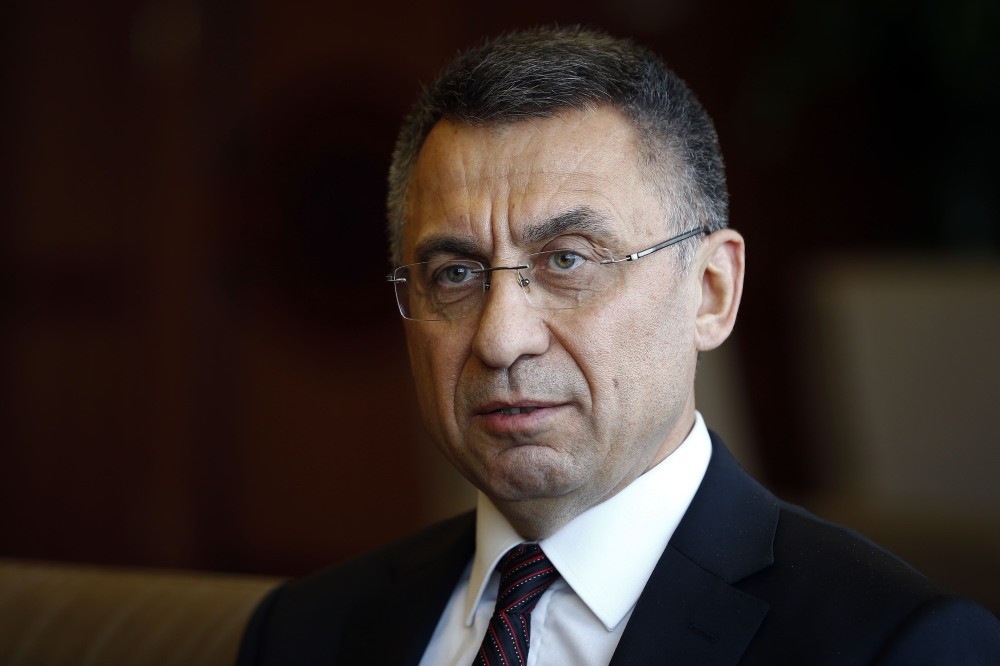 Dr. Fuat Oktay
by Fatih Şemsettin Işık May 23, 2016 12:00 am
The Prime Ministry Disaster and Emergency Management Authority (AFAD) is an organization that has shone through during the Syrian crisis by providing and administering refugee camps along with helping them integrate into Turkish society. The organization is also leading the World Humanitarian Summit in Istanbul, which is the first global summit on humanitarian issues of this size and scope.

Daily Sabah spoke with AFAD President Dr. Fuat Oktay about the two-day summit and Turkey's role in overcoming the current global humanitarian crises. He said that Turkey will share its experiences and practices set an example to the world at the summit, and added that Turkey puts nothing but human sensitivity at the center of its humanitarian initiatives.

DS: Turkey is hosting the World Humanitarian Summit in Istanbul as the first global organization on humanitarian initiatives of this size and scope. What is the importance of this summit amid the ongoing regional and global humanitarian crises?

Turkey is hosting the World Humanitarian Summit, which is to be held for the first time in history in a period when humanitarian crises such as epidemics and mass migration have exceeded the borders of countries. The global humanitarian aid system has raised the alarm.

During the Syrian civil war, which is currently the top agenda topic all over the world and which constitutes the greatest humanitarian crisis humanity has seen since World War II, at least 400,000 people have been killed. Within this period, 13.5 million people in Syria, of which the total population is 20 million, have grown needy and indigent. While some 6.6 million have been displaced, some 4.8 million have taken refuge in neighboring countries.

DS: How can Turkey, as the host country, set an example for solutions to these humanitarian problems?

Today, Turkey is the country hosting the greatest number of refugees in the world. With the contribution of AFAD, a new life has been offered to Syrian refugees fleeing from the war. All Syrian refugees are provided with health services free of charge while Syrian children are sent to schools in order to prevent a lost generation.

At the 26 refugee camps founded by AFAD for Syrian refugees, all physical, social and psychological needs of refugees are met. Having established a new standard in the temporary refugee services provided in cases of disasters and emergencies, AFAD's Sheltering Center Management System (AFKEN) received an award for the best public service from the United Nations in 2015. All the basic necessities are provided at AFAD's refugee centers and, more than that, democratic elections are held, vocational training courses are organized and some campaigns are run to raise awareness of various social problems such as child marriage.

Turkey has funded a source in accordance with U.N. standards corresponding to $9.5 billion with an aim to relieve the wounds of Syrian refugees and enable their re-integration into normal life. However, the total contribution of the international community has been only $462 million. In other words, when the entire world spends TL 1 ($0.34) for aggrieved people, Turkey spends about TL 20.

Our country also took part in the EU Civil Protection Mechanism on May 6, 2015, thanks to AFAD's successful work in the field of disaster preparedness and prevention.

DS: What will be the tangible short- and long-term results of this summit considering the growing humanitarian crisis in Syria?

During the World Humanitarian Summit, which is to determine the world's future humanitarian aid strategies and policies, the main agenda topics will include sharing the burden of the Syrian crisis on an international scale, establishing a sustainable international aid system, infusing our open-door policy to other countries and raising awareness of and consciousness concerning refugees.

The summit is to be hosted along with the secretary-general of the U.N. and will draw world leaders together with the parties affected by crises for the first time. The summit seeks answers to urgent questions regarding the future of the system with the participation of representatives from various fields that play major roles in the humanitarian system, including nongovernmental organizations and the private sector. Turkey is going to share its experiences and implementations to set an example to the world with the international public throughout the summit.

Being of major importance as a critical global meeting, just like the 1993 World Human Rights Conference, the 2016 World Humanitarian Summit will constitute a historic step for the international community's common concerns and targets.

DS: Which specific areas will be discussed at the summit?

After the opening ceremony, some leading figures will speak on behalf of Turkey and the U.N. Speeches by U.N. goodwill ambassadors and representatives of groups affected by crises will follow.

The sessions at which global leaders will declare their obligations to progress and the agenda for humanity document will last two days.

During the summit, some seven meetings will be held in which various challenges in the context of humanitarian crises will be handled and leaders will be able to express their undertakings for solutions of the problems in a more explicit way.

Some other meetings, which are estimated to be conducted on a more technical scale, will be organized with regard to the 12 titles comprising other aspects of the global humanitarian agenda.

In addition, the summit will include various briefings, seminars, workshops and panels organized by governments, international and regional institutions, nongovernmental organizations, the private sector and other actors.

DS: What are the current problems that hinder dealing with global humanitarian problems comprehensively?

Across our southern border, the greatest humanitarian tragedy since World War II is going on. In a world where distances do not matter any longer, it is not fair for our country to shoulder the crisis on its own only because it is across from our border. The international community is required to share Turkey's burden and other countries neighboring Syria in the name of humanity.

About 80 percent of humanitarian crises in the world are caused by conflicts, like the Syrian crisis. Consequently, in order to relieve the pain of millions of innocent civilians, political solutions are needed rather than humanitarian solutions. That is what Turkey argues.

DS: Beyond this summit, what else can Turkey do in terms of relieving humanitarian crises around the world?

Oktay: As German Chancellor Angela Merkel recently said, Turkey does not just lecture on humanitarian aid. It has been practicing more than it says it does in many different fields. With its human-centered diplomacy and with a culture emphasizing that one cannot be relieved until we all help others in need, Turkey is lending a hand to everyone in need around the world while opening its doors to more than 3 million refugees and sharing what it has with them.

Lending a hand to hundreds of thousands of people aggrieved by humanitarian crises and natural disasters in Gaza, Bosnia, Somalia, Haiti and Myanmar through AFAD, Turkey is today in a position to give aid, not receive it.

Having sent the first humanitarian aid package to the Philippines after the typhoon disaster in 2013, AFAD has provided humanitarian aid to 51 countries on five continents over the last five years. It has also participated in search and rescue operations.

In Somalia, the aid provided by Turkey through AFAD outdid the conventional humanitarian aid notion common in Africa so far. On the Horn of Africa Turkey has displayed a new and successful humanitarian aid model that introduced working in the field, forming good relations and appealing to people's hearts.

In all countries we head to, we are motivated by this humane approach. Turkey acts with humane sensitivities while delivering humanitarian aid. Thanks to that, we form bridges of friendship with the people we help.