CHP back in hot water for swearing at president, ruling party 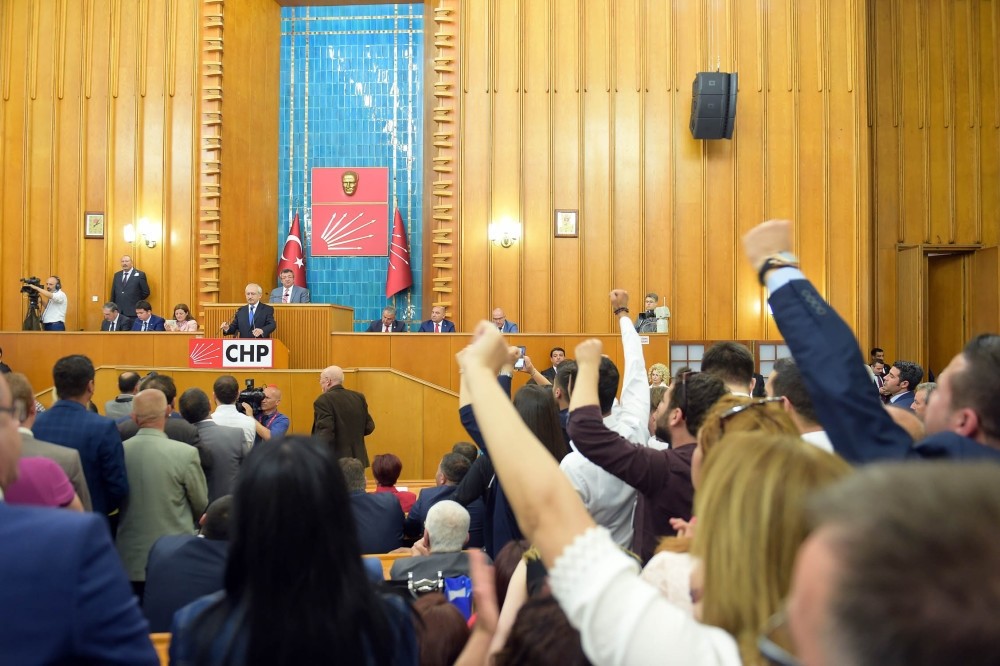 Ku0131lu0131u00e7darou011flu speaking at Wednesdayu2019s meeting as party members chant slogans.
by Daily Sabah May 26, 2016 12:00 am
The opposition Republican People's Party (CHP) has drawn outrage again for swearing at President Recep Tayyip Erdoğan and the Justice and Development Party (AK Party). The party members who shouted the swear words at a meeting face legal action.

Party members were heard shouting swear words against President Recep Tayyip Erdoğan and his former AK Party at Tuesday's meeting. CHP leader Kemal Kılıçdaroğlu, known for his earlier derogatory remarks against the government, was slammed for "approving" the swearing chorus before him.

Kılıçdaroğlu was performing his usual rant against the government and President Erdoğan at his party's parliamentary group meeting when his audience broke into a slogan that can be roughly translated as "B... of Tayyip will not daunt us" in reference to support for the president by the ruling AK Party he once served as chairman. Kılıçdaroğlu, known for similar expressions if not outright swear words, appeared nodding in approval, drawing the public ire.

Erdoğan was the first to file a complaint against Kılıçdaroğlu, who recently stepped up his derogatory rhetoric against Erdoğan and the government, abandoning the earlier discourse of polite criticism he adopted when he was installed as chairman of the main opposition party six years ago.

Erdoğan's lawyers filed a complaint to an Ankara court for prosecution of the CHP members shouting the swear words. The text of the complaint said the slogan party members shouted was "unprecedented in the Turkish Parliament as a slang word, a rude remark." The lawyers said in the complaint it was unfortunate that neither Kılıçdaroğlu nor any other senior officials at the meeting did not intervene, adding that they even implied their approval. "The leader of the main opposition party made it a habit to insult Mr. President and the slogan by his fellow party members can be viewed as a continuation of this sick state of mind," lawyers said in their complaint. The CHP members may face imprisonment for the insult, which was broadcast live.

The AK Party administration also started the legal process to file a lawsuit against the CHP over the incident. In a joint statement, the party's senior officials said the CHP's group meet was "the scene of incidents contravening with ethics, morals and kindness in politics." They criticized the group of CHP delegates for "fervently shouting the words that we cannot repeat in this statement" and Kılıçdaroğlu who remained silent "when this scandal erupted and continued his speech like nothing happened after the slogan was shouted."

It seems like gaffe-prone Kılıçdaroğlu may avoid prosecution this time over his remarks as a possible lawsuit will involve members of his party. Kılıçdaroğlu himself had faced a barrage of lawsuits for his remarks to then Minister of Family and Social Policies Sema Ramazanoğlu in April. While addressing fellow party members at a meeting in April, Kılıçdaroğlu said Ramazanoğlu "knelt before someone." "No one talks about it, neither the governor nor police chiefs. The minister of family does not talk because she knelt before someone," Kılıçdaroğlu said. His remarks drew widespread criticism from women's rights activists and lawmakers. Kılıçdaroğlu was speaking about the sexual abuse of children by a teacher in central Turkey and criticized the government for what he called the defense of a nonprofit organization where the teacher briefly volunteered.

He lashed out at Ramazanoğlu's remarks, which echoed other officials' statements that pointed to the individuality of the crime.

Although Kılıçdaroğlu is known for gaffes like "no one can claim the CHP is a good party" while trying to say otherwise, he is also widely criticized for insults mainly targeting the government and Erdoğan, most recently calling him a "sham dictator." He also repeatedly used swear words not fit for print for the president during the latter's tenure as prime minister, stopping short of calling him a certain slang word starting with the letter M.

The AK Party's senior officials said in their statement released Wednesday that Kılıçdaroğlu was apparently so enraged at remaining as an opposition leader that he consented to hear a chorus of insults "that can only be compared to football hooligans" by CHP supporters before him. They say they would "start the legal process" both against those uttering the swear word and "those doing nothing to silence them."
RELATED TOPICS