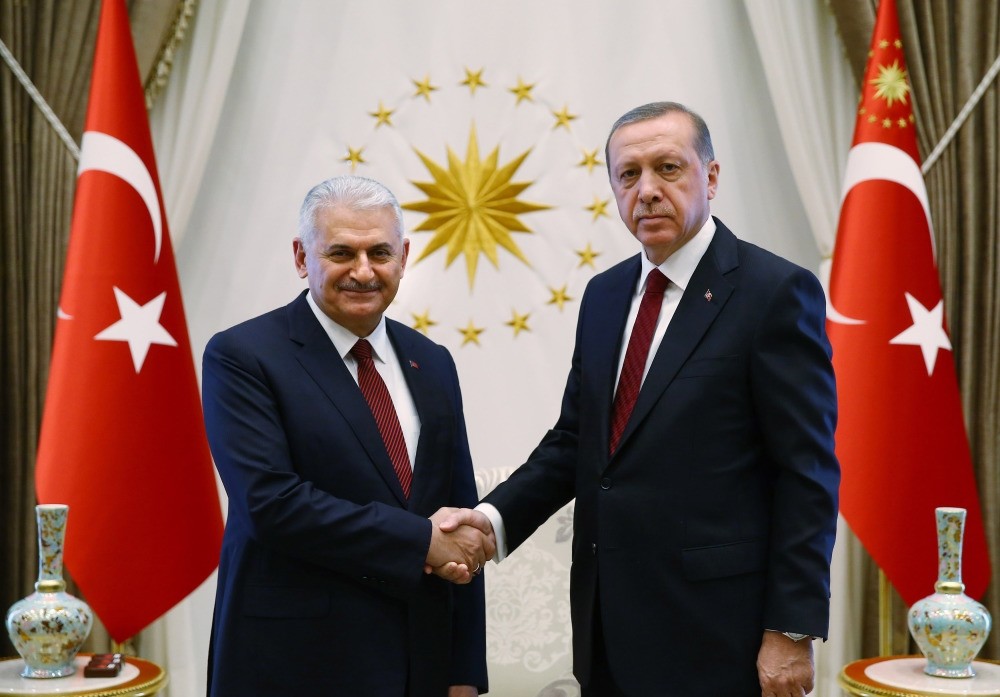 Having formed the 65th government on Tuesday, Prime Minister Yıldırım's term will focus on further reforms and particularly a new constitution and switching to a presidential system

As new Prime Minister Binali Yıldırım announced late Tuesday the legislative program for the 65th government, which aims to prioritize a new constitution and presidential system in Parliament, the assembly is set for a parliamentary confidence vote on Sunday May 29. First, Parliament will address and discuss items listed in the program and propose changes. Addressing parliament members, Prime Minister Yıldırım vowed to continue constructive reforms, adding that the new government aims to increase rights and freedoms. In the parliamentary group meeting for the ruling Justice and Development Party (AK Party), Yıldırım signaled changes to Turkey's foreign policy and promised to decrease foes and increase allies.

Prime Minister Yıldırım began by noting that previous AK Party governments have fulfilled all of their pledges made to the nation and vowed to continue to fulfill pledges as the new AK Party government. "The 65th government will increase the quality and the speed of actions, will fulfill the pledges our people are waiting for without any delays and will take all necessary steps towards this. Just like previous AK Party governments, we will maintain our reformist perspective and we will remove all the legal and executive obstacles slowing the country's development." Yıldırım said the government "will intensify work in six main areas, including democracy and justice, education, changeover in the real economy, prioritized transformation programs, public administration and public finance."

Underlining that the government will continue its determination to combat actors threatening unity, Yıldırım reiterated that terrorism would be eliminated from Turkey. Stressing that during the term of the 65th government, counter-terrorism operations will continue until citizens' lives and property are secured and threats against the rule of law are eliminated, Prime Minister Yıldırım said: "Our combat against all terrorist organizations will persist, in particular with the [PKK] terrorist organization and parallel terror organization [referring to the Gülenist Terror Organization (FETÖ)]. Any illegitimate structure that threatens the unity and brotherhood of our nation and the survival of our state will not be tolerated."

He touched upon the government's ongoing struggle against FETÖ and said that the government's "legal and administrative combat will continue in an uninterrupted and pertinacious way against the parallel terror organization and its domestic and foreign extensions, which came to light due to the attempted coup … No structure or figure will be allowed to arm-wrestle with the government." Prime Minister Yıldırım announced that a new professional security force organization is to be established to protect Turkey's borders.

With regards to the presidential system, Yıldırım said a presidential system is the best fit for Turkey's current structure due to political instabilities caused by the parliamentary system, adding that the "new Turkey" needs an active and dynamic administration. "With the new constitution, a new political system is envisaged: one in which elections are able to form stability, the executive and the legislative are independently efficient, the democratic balance and supervision mechanisms work, in which political representation of social dynamics is ensured and whose resolution processes are accelerated. The AK Party's suggestion of the presidential system is grounded on a unitary system."

As well as the struggle against terrorism, a new constitution and a presidential system, the 65th government will also introduce a number of social reforms that includes enhanced solutions to workplace safety and ease the claiming of severance payments. With regards to education and youth pledges, Yıldırım said: "The notable supremacy of Turkey is its young and dynamic population. By taking this fact into consideration, we have progressed in the subjects of equal opportunities in education and increasing everyone's access to educational possibilities. During the upcoming period, we will speed up education specialization and improve quality at every level." As he continued by underlining that the new government term would increase the growth potential of Turkey by strengthening macro-economic stability and gains, Yıldırım underlined that the main aim for monetary policy is to establish price stability and sustainability.
RELATED TOPICS