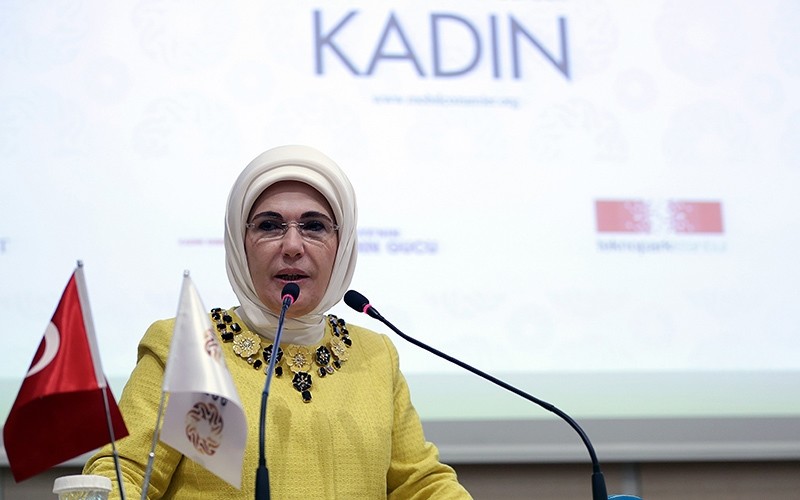 First lady Emine Erdoğan said on Monday that the most important issue on female employment and entrepreneurship was to end the exploitation of women's labor.

In remarks made during her speech at the closing ceremony of "Mobile Solutions Address: Women" project in Istanbul, Emine Erdoğan said: "Elimination of barriers such as wage differential, glass ceiling obstacles [invisible but real barriers to advancement in a profession, typically applied to women] are requirements for equity."

The project, backed by the first lady, aims to increase female employment, especially in mobile technologies.

"We have to establish gender justice in every aspect," Erdoğan said.

Noting that participation of women in economic life would speed up development, allowing for a balanced economic growth, the first lady called for supporting not only female employment but also women entrepreneurship.

The project, organized by the Istanbul Development Agency, Istanbul Commerce University, Teknopark Istanbul and the Women and Democracy Association, brought together 141 university female graduates, who completed their 220-hour training program on mobile technologies as well as mobile design this year.

While 41 participants took full-time courses, the others took online training.

Program participants created 18 projects, three of which were awarded by Erdoğan. The three projects' owners will use an office at Teknopark Istanbul and have access to all its facilities.

The three projects include a location sharing app for people experiencing violence or abuse, a reminder for medical rituals for senior people and another app to find registered cleaning ladies for white-collar working women.

"Only one in every four women in Turkey is in the labor force and employed [female employment rate for 2014 is 26.7 percent]," according to the organization.