Everything to be resolved under framework of law, PM Yıldırım says 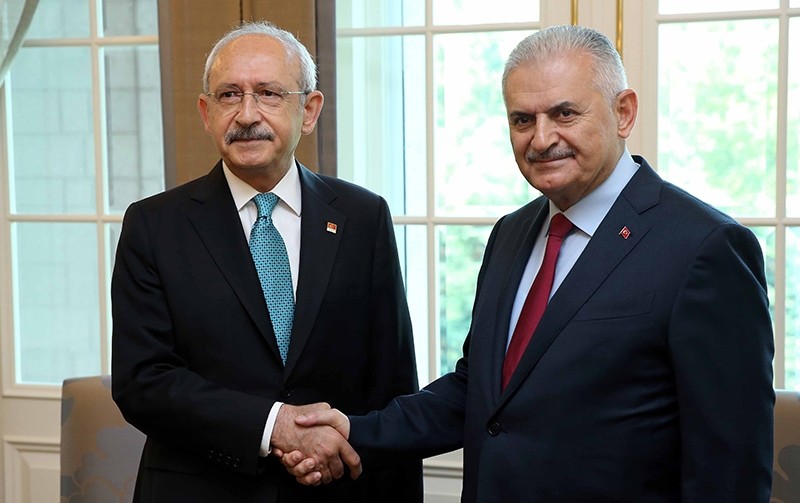 Prime Minister Binali Yıldırım said on Tuesday that Turkey submitted the file to officially request Fethullah Gülen's extradition from the United States, asserting that Turkey has no doubts about who the perpetrators are behind the failed July 15 coup attempt.

Speaking at the Justice and Development Party (AK Party) parliamentary group meeting for the first time since the failed coup attempt, Yıldırım criticized the U.S. for asking for evidence to extradite Gülen. Yıldırım said that when terrorists attacked the U.S. on 9/11, there was no proof to request terrorists, and urged the U.S. to return Gülen. "Why are you insistently asking for proof when it is all obvious? Stop protecting this traitor, this has no benefit for you," Yıldırım said.

Stressing that they are absolutely sure of who was behind the coup, Yıldırım said that these traitors will be completely rooted out and that no "parallel structure" or subversive organization will be able to threaten the government again.

"If the coup of July 15 succeeded, then Turkey would be under a dark dictatorial regime," Yıldırım said. He also assured people that the heaviest penalties will be imposed on the traitors, adding that the necessary rearrangements will be made if necessary. He said that traitors in military uniforms should not be mistaken for the heroic Turkish Armed Forces, Yıldırım said that Turkey will act within the law to punish the traitors and "purge the honorable Turkish army."

Yıldırım further addressed the concerns about aides who followed orders without being informed of the coup. "If there is anyone who misguidedly acted against them, they will be punished as well. Two wrongs do not make a right," Yıldırım said.

Yıldırım said that the fight against subversive organizations will be carried on in an even more effective way, adding: "After cleaning the traitors within, Turkey has entered a new phase."

Calling July 15 was an important victory for Turkey, Yıldırım emphasized that the people wrote history. Yıldırım thanked media organizations, nongovernmental organizations and business leaders for their common sense throughout the process, further congratulating the People's Republican Party (CHP), National Movement Party (MHP) and the Peoples' Democratic Party (HDP) for their support and resistance against the coup. Yıldırım also thanked opposition parties, especially the HDP for signing the joint coup declaration.

He said that the Council of Ministers and National Security Council will meet on Wednesday under President Recep Tayyip Erdoğan. "We will make important decisions tomorrow, we do not have any time to lose," Yıldırım said. He added that with the new decisions to be announced, such coup attempts in the future will be impossible.