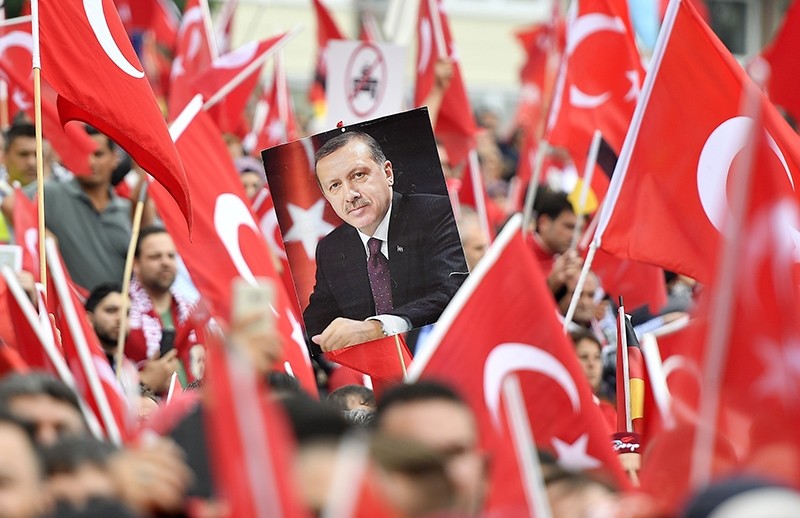 A picture of President Erdou011fan is framed by national flags during a demonstration in Cologne, Germany (AP Photo)
by daily sabah Aug 01, 2016 12:00 am

Government spokesman, Deputy Prime Minister Numan Kurtulmuş, told the press that the Turkish Armed Forces (TSK) is being restructured in order to prevent power from being focused in a singular institution. Asserting that the restructuring of the TSK has a well-prepared plan, Kurtulmuş said on Monday after the Cabinet meeting that the aim is to empower civic authority. "The new regulations intends to prevent the [power over the] armed forces from being amassed by a single institution. In this regard, the Gendarmerie General Command and Coast Guard Command will become subordinate to the Interior Ministry and the [Land, Air and Naval] Forces Commands and General Staff will be subordinate to the National Defense Ministry and the president, respectively. The military schools have been closed. The preparations to transform the military into a professional one are underway," Kurtulmuş said.

Talking about the reasons for the reforms, Kurtulmuş said: "We have to prevent the TSK from being abused as means for coups. The system is structured in a way that allows coups. We are working on a new system in which no one will ever think of launching a coup. The TSK will be modernized, rendering it more powerful in protecting our country." Kurtulmuş added that Turkey will continue to fight terror and terrorist organizations with the "utmost determination."

Responding to Pope Francis' statement that he does not know what exactly is going on in Turkey, Kurtulmuş asserted that the pope should send an envoy to Turkey and ask the people about the July 15 coup attempt. "Ask any person walking on the streets," Kurtulmuş said, "almost all of them will say that it was done by FETÖ [Gülenist Terror Organization]."

Kurtulmuş also touched on the German judiciary, which blocked President Recep Tayyip Erdoğan from participating in a Turkish-German rally through live-video feed on Sunday. Prefacing that the German judiciary has not been able to bring the neo-Nazi National Socialist Underground (NSU) trial to end for years, he said it clearly demonstrated double standards by immediately barring Erdoğan. Kurtulmuş said, "The trial of the neo-Nazi NSU has been lingering on for many years without any conclusion. However, Germany's Federal Constitutional Court barred President Erdoğan from participating in a rally through video link within 24 hours. Praise be to the German judiciary. Of course, it is intriguing why they do not conclude other cases with similar haste. It is definitely a fine demonstration of double standards."

Regarding the hiring of new civil servants, Kurtulmuş said that the prominent criteria will be merit and loyalty. "We are aiming to conclude the restructuring process within a year. Our first aim is to achieve normalization. We will completely demilitarize the public administration while also furthering transparency and democratic values. The bureaucracy will be opened to our citizens. We only have the two criteria of merit and loyalty to the people."

Kurtulmuş said that the government will continue to enact structural reforms. "We will improve the economy in Turkey. We are currently working on improving investment opportunities in Turkey while trying to provide more employment and increasing high-tech product output. We are also aiming to gain more friends and allies through our renewed foreign policy."