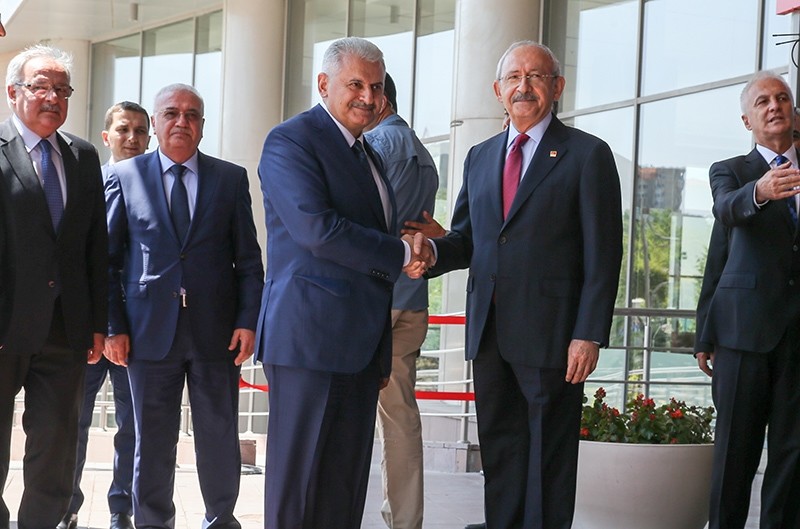 Prime Minister Yıldırım visited the leaders of both parties on Monday to receive feedback on steps that will be taken in the near future, after the failed July 15 coup attempt, stating that the common will among the parties is stronger than it has ever been.

Making a joint statement to the press after Yıldırım's visit to Kılıçardoğlu at the CHP's official headquarters in Ankara, Yıldırım said that the government's priority is to eliminate the conditions that led to the ongoing state of emergency. "Kılıçdaroğlu shared his thoughts and concerns on delegated legislation with us. We will take his concerns into consideration and our meetings will continue within this framework," Yıldırım said, while Kılıçdaroğlu added that "We held a productive meeting in which we conveyed our thoughts and concerns to the prime minister as he took notes."

Commenting further on the process of designing a new constitution as well as generating articles addressing the urgent needs, Yıldırım said, "The AK Party, CHP and MHP will each task a party member to report to their chairman," stressing the importance of the three parties working together on a compromised constitution package.

Yıldırım met Bahçeli in Parliament, informing the party leader about the next steps to be taken after the July 15 coup attempt. Making a joint press statement afterwards, Bahçeli said, "We conveyed our opinion about the decisions taken. Hopefully the current state of emergency process will be carried out with success, precluding any further coup attempts," also thanking President Recep Tayyip Erdoğan for his gesture of withdrawing his legal complaints against both the CHP and MHP.

"The coup danger has not passed yet, this [FETÖ] is a quite dangerous structure," Yıldırım said, adding that the main purpose of the delegated legislation is to parry any possible threat of a further coup.

The party leaders were invited by Erdoğan to the Presidential Palace through a letter emphasizing the significance of unity during such critical times. In the meeting the leaders discussed the latest developments following the coup attempt and exchanged opinions on actions to be taken as part of operations against FETÖ, as well as agreeing on designing a mini constitution package to purge Gülenist infiltrators from the judiciary and enhance its independence and objectivity.