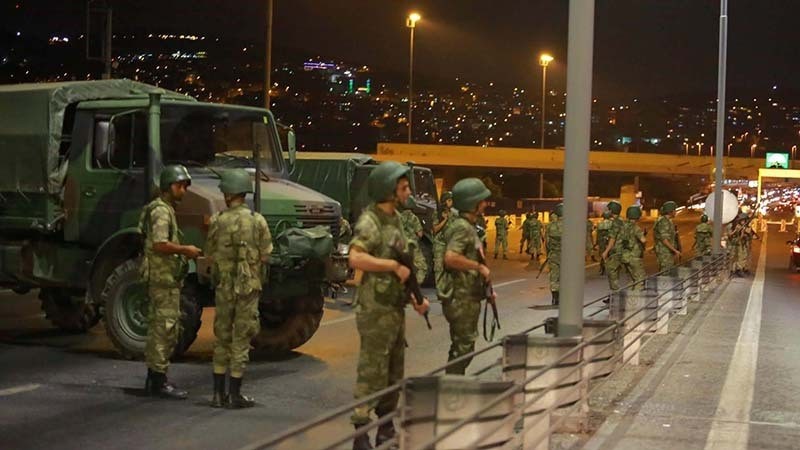 Access to the Bosphorus bridge, which links the city's European and Asian sides, in Istanbul, Turkey, blocked by soldiers during the FETu00d6-led coup attempt, July 15, 2016 (Reuters Photo)
by Anadolu Agency Aug 07, 2016 12:00 am

A leading Turkish-American NGO has taken out an advert in a major U.S. newspaper calling for the world to stand by Turkey's democratically elected government after the defeated coup of July 15.

Giving a brief introduction to the bloody coup attempt, where 240 were martyred and nearly 2,200 injured, TASC stressed that the Gülenist Terror Organization (FETÖ) attempted "a coup against democracy and the rule of law."

The deadly coup attempt was organized by Gülen's followers, according to the Turkish government. The U.S. is still processing two tranches of documents Turkey sent for Gülen's extradition from the United States.

According to TASC's advert, millions of Turkish citizens from all walks of life flowed into the streets and put their lives in danger to defend and protect Turkish democracy and the elected government.

TASC said that the West failed to show solidarity and support for the Turkish people and their democracy. Instead, Western countries "dishonorably" tried to justify the coup, according to the advert.

"The Western world is failing this democracy test by letting down the Turkish people that defended our common values," it said.

Thanking the Turkish people on behalf of Turkish citizens living in the U.S., the representatives promised to do their best that Gülen would be punished.

"Our nation, political parties and parliament have shown an honorable solidarity and full unity against the coup and have given the proper response to the coup plotters," the memorandum said.

"We want to reiterate that the steady determination by all segments of society against the malicious coup attempt is very important in terms of that Turkey's long-established democratic tradition is put forth one more time and that our democracy gets even better."