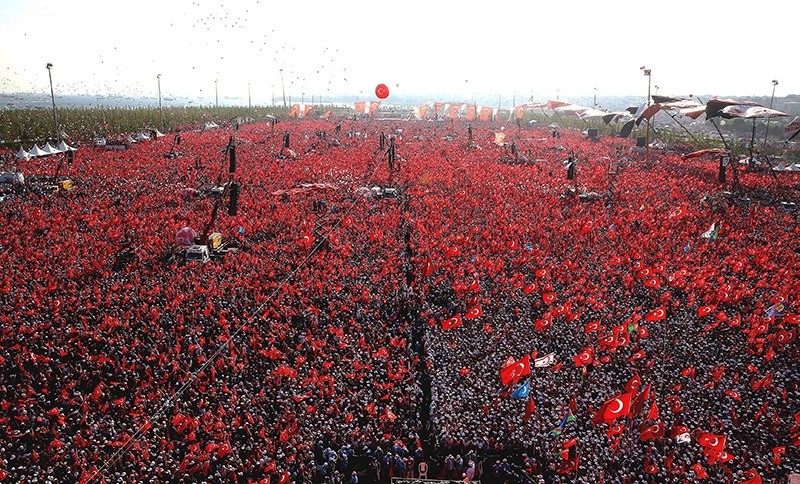 People wave Turkish flags and picture of Turkish President Recep Tayyip Erdou011fan during a rally to protest the failed coup attempt on 15 July 2016. (IHA Photo)
by Anadolu Agency Aug 08, 2016 12:00 am

Millions of people on Sunday gathered in Istanbul in a spectacular display of unity that brought ruling and opposition party leaders together in a first in modern Turkey history.

The rally started with a moment of silence, the Turkish national anthem and the recitation of the Holy Quran in memory of the martyrs. Mehmet Görmez, head of religious affairs, led a prayer of healing and blessing.

One of the heroes of the anti-coup resistance, Orcun Şekercioğlu, who lost his leg after being shot at a confrontation with rebellious troops, told the crowd of the historic struggle: "We had our belief on our side. My friends were shot on my right and left but we kept on moving."

Şekercioğlu compared the night to World War I's Battle of Gallipoli, known as the Battle of Çanakkale in Turkey. "It was a new Çanakkale, a new struggle of independence," he said.

MHP Chairman Devlet Bahçeli praised the popular resistance to the July 15 attempted coup in his speech.

"I watch Turkey beaming with pride. There is faith here, there is will here," he said. "People stood tall, and taught a lesson to the traitors and terrorists of the July 15 coup bid.

Yenikapı, the name of the massive square that hosted Sunday's rally, means "new door" in Turkish.

Main opposition leader Kemal Kilicdaroglu stressed that in the post-coup Turkey, politics should be left out of mosques, barracks and courthouses.

"The July 15 coup attempt has opened up a new door of compromise. Post July 15, now there is a new Turkey. If we can carry this power and the culture of reconciliation even further, we will leave a better Turkey for our children," he added.

Gen. Hulusi Akar, chief of the general staff, delivered a surprise address at the rally. Coup-plotters would face the "heaviest punishment", he said, in a rare public speech by a Turkish military figure.

Akar paused his remarks many times to repeatedly say "thank you" to the audience, who kept chanting praises for the Turkish military.

Prime Minister Binali Yildirim, in his address, likened the resistance to the July 15 coup attempt to the War of Independence that helped establish modern Turkey.

"They attempted to occupy our land disguised in Turkish military uniform and steal away the national will," Yildirim said, referring to putschists.

"Every coup which does not kill us, makes us stronger. Just like here and now," he said.

The prime minister also praised the opposition Republican People's Party and the Nationalist Movement Party for their support.

Turkish President Recep Tayyip Erdoğan, who took the podium to thunderous chants, said: "Our presence today upsets our enemies just like it did on the morning of July 16."

Referring to the July 15, Erdoğan said: "On that night there were people who risked their lives to stop the coup and they filled the streets. History will remember the names of our martyrs… in golden letters."

About a possible reinstatement of the death penalty in Turkey for those involved in the defeated coup, Erdoğan reiterated his stance that the decision would be left up to Turkish lawmakers in the parliament.

The president asked Turks across the country to extend their "democracy watch" rallies until Wednesday. "Today is a comma [pause] in democracy rallies, we will end the rallies on Wednesday," he added, before asking the crowds "Is that alright?" and receiving a resounding "yes".

Sunday's massive Democracy and Martyrs' Rally was the first time the leaders of the AK Party, CHP and MHP had shared a platform. Former President Abdullah Gül and former Prime Minister Ahmet Davutoğlu were also in attendance.

Bag checks and searches were carried out at the rally's entrance points as a police helicopter hovered overhead, and large numbers of police and security personnel, as well as ambulances and more than 700 medics, were on duty for the cross-party event.

Political flags and banners were banned from the rally to underline the political consensus against the July 15 coup attempt.